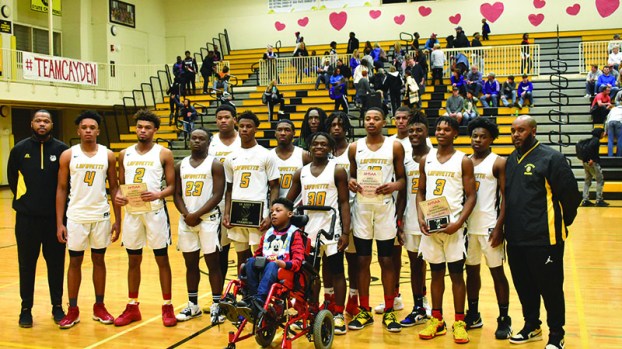 Last week, the LaFayette boys basketball team won the 2A area 9 tournament by soundly defeating Ranburne, but the win was just part of Fridays’ event.

The Bulldogs also celebrated a kindergartner named Cayden Finley at Eastside Elementary who suffers from Hypoplastic Left Heart Syndrome, which is a birth defect that causes the left side of the heart to be underdeveloped.

To support the kindergartener, Eastside Elementary planned a “Wear red for Cayden” day, which had most of the students showing up to school in red shirts.

It didn’t stop at the elementary school, as the stands in the LaFayette High School gym was a sea of red.

Threadgill was made aware of the “Wear red for Cayden” day through his wife, who teaches at Eastside. She is also one of the cheerleader sponsors. The Bulldog cheer team picks a theme for every game and Friday’s theme was supporting Finley.

Along the walls, there were red hearts. On the railing above the floor, there were two signs. One said “#TeamCayden,” while the other read “Play with all your heart.”

The players also showed their support for Finley. In warmups, they had red bands either on their wrists or on their shirts. Some wore red shoes.

“We had some ideas of some patches on their jerseys, and if they had red shoes, they could wear them,” Threadgill said. “I told them the options we could do to support the young man. I didn’t make them do it.”

All 14 players on the roster wore something red.

“These guys have been around for a long time, and they know the power of their reach,” Threadgill said.

Community outreach isn’t anything new to the LaFayette players. Every year, they schedule a 3-point shootout, a dunk contest and a game for the entire student body of Eastside Elementary. The Bulldog football team travels to the elementary school every Friday before a game to greet the students.

“Those things are so small to our varsity players, but they are so big to our young ones,” Threadgill said. “We want to push academics, character development and social outreach as some things we want to focus on outside of basketball. It doesn’t take a lot of skill to be a good person. These guys look forward to giving back. They look forward to doing things that will be remembered outside of just playing ball.

“In the grand scheme of things, we’re not here to play basketball. There have to be some bigger things that we’re doing this for.”

Since ending the regular season on a three-game losing streak, the Lanett boys’ basketball team has turned a corner. The... read more