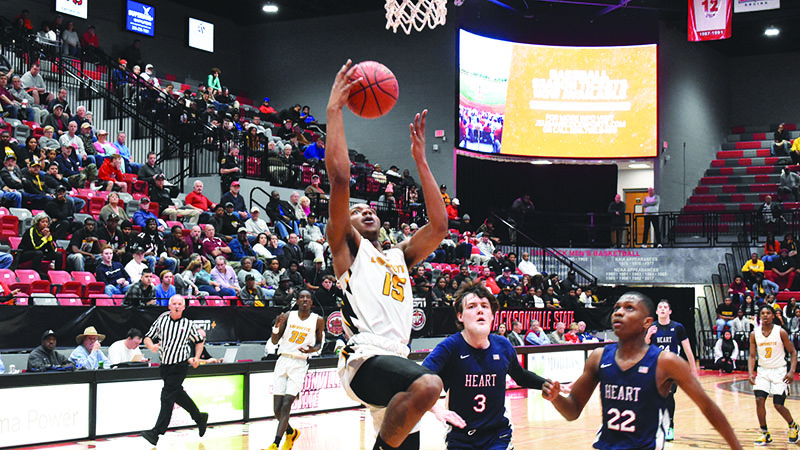 LaFayette senior forward Jordan Wallace finishes at the rim with a layup in the Bulldogs’ regional championship win against Sacred Heart on Tuesday. --Photo by Cody Estremera

JACKSONVILLE — The LaFayette boys’ basketball team is finally moving past Jacksonville, as the Bulldogs defeated Sacred Heart 84-49 on Tuesday in the Pete Mathews Coliseum at Jacksonville State.

What a win,” LaFayette head coach Obadiah Threadgill said. “We’ve been here four straight times. We’ve never been able to get out of here alive. What an opportunity and what a showing.”

The Bulldogs started the first quarter slowly, scoring just six points in the first 3:11. They were missing shots from the outside, as they started the quarter missing their first five 3-point attempts.

With about two minutes left in the quarter, the Bulldogs found their rhythm, finishing the quarter on a 10-2 run, giving them a 20-7 lead.

Senior Jordan Wallace was a major scoring option early in the second, scoring seven of his 12 first-half points in the quarter.

Then, they started to slow. A couple of players got in foul trouble, forcing Threadgill to his bench.

This opened a window for the Cardinals, who finished the quarter on an 11-2 run.

“We were in a little bit of foul trouble,” Threadgill said. “We had some guys in during that run that get the same opportunity as these guys [three of the four senior starters], but they don’t have the reps on them. We flustered a couple of opportunities and missed a couple of layups.”

LaFayette led by 10 at the half.

Both teams basically traded baskets to start the third quarter, as the Bulldogs increased their lead by one-point by the 3:34 mark. Then, the Bulldogs turned a page. They started to get defensive stops, which led to points. They grew their lead to 18 by the end of the quarter.

In the fourth, the Bulldogs just continued their onslaught, scoring the first six points of the final quarter.

By the end of the game, the Bulldogs had outscored the Cardinals 23-6 in the final eight minutes of play.

“They play a lot of 5A, 6A and 7A games, and he [Sacred Heart head coach Ralph Graves] puts them in some tough competition. Tonight, we just had a little too much for them,” Threadgill said.

Wallace finished as the game’s leading scorer, finishing with 25 points and eight rebounds.

“Last game, I was kind of upset because I didn’t have a good offensive game,” Wallace said. “My boys backed me up. I did what I could to help them out, and I just ended with 25.”

All three players were named to the 2A Northeast Regional Tournament team. Boston took the MVP award.

The Bulldogs travel to the BJCC to play Barbour County on Monday at 4:30 CT.

“Finally getting to Birmingham, it been a dream of mine since I was pulled up in the eighth grade,” Boston said. “Every year we’ve had the same dream: get out of Jacksonville. To finally accomplish that dream, it means a lot. Now we can’t relax. We have another dream of winning a state championship.”