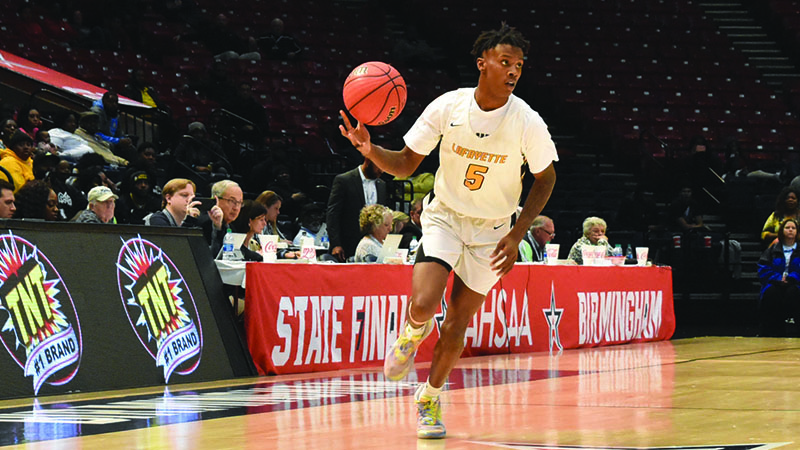 LaFayette senior Markevious Moore takes the ball down the floor in the Bulldogs 64-62 loss to Barbour County on Monday. The Bulldogs finished the season 31-1.-- Photo by Cody Estremera

BIRMINGHAM — After dominating their 2019-20 schedule, the LaFayette boys’ basketball team fell to Barbour County 64-62 in the 2A state semi-final game.

“That team was a really tough team just physically,” LaFayette head coach Obadiah Threadgill said. “They’re just so big and so long and strong, and they play like it.  I’m very proud of our young men for the way they competed. We made a few mistakes, and they cost us.”

“It was just like we weren’t there,” senior point guard Corey Boston said. “I put it on myself. Being the leader of the team, I should have sparked a fire under these guys early.”

“We just got it in our minds that we were ready to play,” Boston said.

The Bulldogs ended the first half down one.

LaFayette continued its run into the second half, scoring 24 seconds into the third quarter. The basket gave LaFayette its first lead of the game. A minute and 15 seconds later, sophomore center Antavious Woody hit a jumper to give the Bulldogs a three-point lead.

From that point, the third quarter was a fight. Both teams answered a score. The largest lead of the quarter was three points.

The game changed with 1:15 left in regulation. Boston, the Bulldogs’ primary ball-handler, picked up his fifth foul. At the time, LaFayette trailed by two, but its offense was stagnant.

The Bulldogs made just two shots the remainder of the game.

Throughout the season, the Bulldogs were able to speed up games by pressing teams and forcing turnovers. They didn’t Monday.

“They just played really big. Their spacing was good,” Threadgill said. “We got our hands on some balls early, but they just came up with the 50-50 balls. When we did set our press, they just did a good job of breaking it.”

Instead of forcing turnovers, the Bulldogs turned the ball over, finishing with 17.

“Normally that number is more beneficial to us,” Threadgill said.

LaFayette was also unable to get to the free-throw line, finishing with just four attempts. Barbour County went to the line 23 times.

Tae Burton led the Bulldogs in scoring, finishing with 26 points. Boston was the only other Bulldog to finish in double figures, scoring 11 points.
The Bulldogs finished the year 31-1. They will graduate 11 of the 14 players on the roster.

“These guys have some really bright futures ahead of them,” Threadgill said. “I’m very thankful for them, not just as basketball players but ambassadors to our school. These are great young men.”