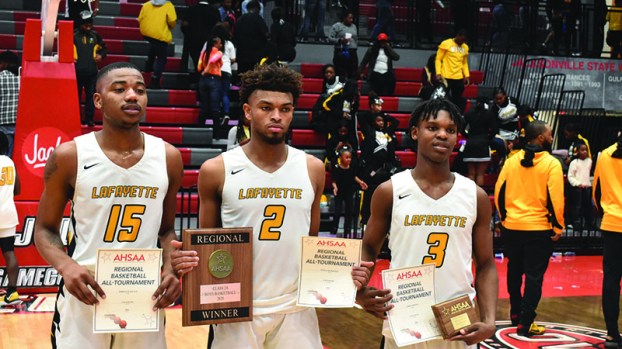 When the LaFayette boys’ basketball team picked up its first loss of the season on Monday, it was an end of an era for the Bulldogs.

The Bulldogs not only lost a perfect season and a chance at the school’s fifth basketball state championship, but they lost most of their team that reached the state semifinal game, as they graduate 11 of the 14 players on the roster.

“I don’t think about all that we’re losing after this year,” LaFayette head coach Obadiah Threadgill said. “I think about how blessed I am to be in a position to coach them, not just this year but the last four years. I wouldn’t trade the experience with any of these guys for the world.”

“All of us are pretty much brothers,” senior guard Tae Burton said.

The 11 players have been together for 12 years now since they grew up together. They learned how to play basketball and football from each other’s parents, getting into the sports that some will play at the next level.

Most of the seniors started playing basketball together in elementary school. Some started as third graders, like guard Markevious Moore, Burton and forward Jordan Wallace, while others, like guard Corey Boston, started in the fourth grade.

“It’s been a minute,” Boston said. “All of us started playing around the same time.”

Threadgill has been at LaFayette for nine years now. At least one member of the 2020 class has been on his team for five of his nine years, as Boston and Wallace were pulled up to the varsity team as eighth-graders.

“To watch all of them develop into young men, it’s amazing,” Threadgill said. “A lot of their personalities are so different, but when they come together, it’s a perfect harmony.”

Forward JP Walker will play football at the University of Tennessee in Chattanooga. Boston, Burton and Wallace each have a chance to play basketball in college.

Sophomore center Antavious Woody will be one of the three players returning. He was the sixth man for most of the season before starting most of the final month of the season. He will be joined by juniors Ty’Quavian Daniel and Ja’Mariae Daniel as the only players that have varsity experience.

Both Ty’Quavian and Ja’Mariae Daniel provided depth at the guard spots throughout the 2019-20 season.

The Lanett boys basketball team has been one of the more dominant teams throughout the last four years, winning three... read more