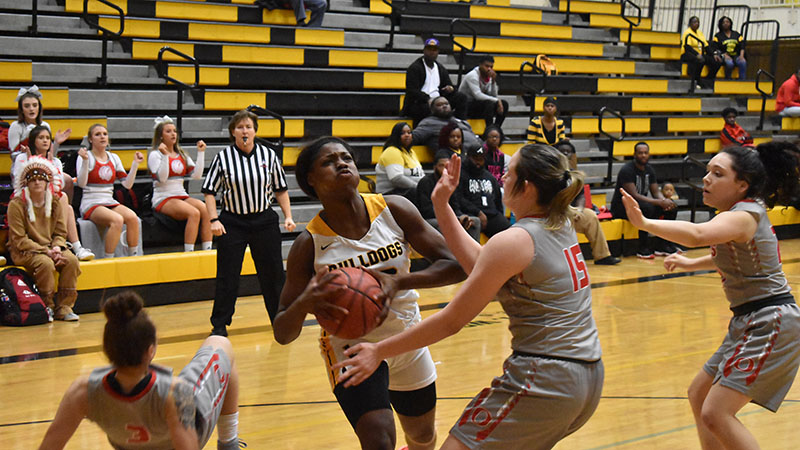 LaFayette junior Feliah Greer fights through contact on the way to the rim.--Photo by Cody Estremera

With six seconds left in the LaFayette girls’ basketball team’s 64-45 win against Ohatchee, LaFayette head coach Fred Bridges broke character. Normally, he likes to stay stoic during a win, but with the clock ticking down to zero, he broke into a huge smile and started to pump up the crowd.

“It was huge for the girls and the program,” Bridges said. “We’re very ecstatic about what we’re building here.”

The Bulldogs started off slow against the Indians, as they were getting to the rim but shots just didn’t fall.

LaFayette ended the first quarter with a four-point lead. Junior forward Feliah Greer scored all but two of the Bulldog’s 12 first-quarter points.

Just as she always does, Greer was able to get inside and finish through contact in the first quarter.

Early in the second quarter, the Bulldogs’ tough shooting night continued, as the Indians cut the lead down to just three points by the six-minute mark.

Then junior guard Ebony Williams found her shot. She had three shots roll out in the first eight minutes, but she drilled shot after shot in the second. She finished with eight of the team’s 19 second-quarter points.

At halftime, the Bulldogs led by 12.

The Bulldogs weren’t able to grow their first-half lead in the third quarter as a couple of Indians got open looks inside.

Greer led all scorers with 25 points. Williams was second with 19 points. Fifteen of the 19 points were scored behind the arc.

Junior Alahbra’J Todd finished with 11 points. She was able to get inside and score. Alongside her scoring output, the guard was tremendous on defense, forcing bad passes and coming up with a couple of steals.

“She’s very consistent. You know what you’re going to get from Todd day in and day out, whether that is in practice or a game,” Bridges said. “We’ve labored her as the show stopper. We put her on the best player on the opposing team.”

The Bulldogs will travel to Jacksonville State for their game on Friday. They will play the winner of Fyffe and Collinsville at 3 p.m. CT.