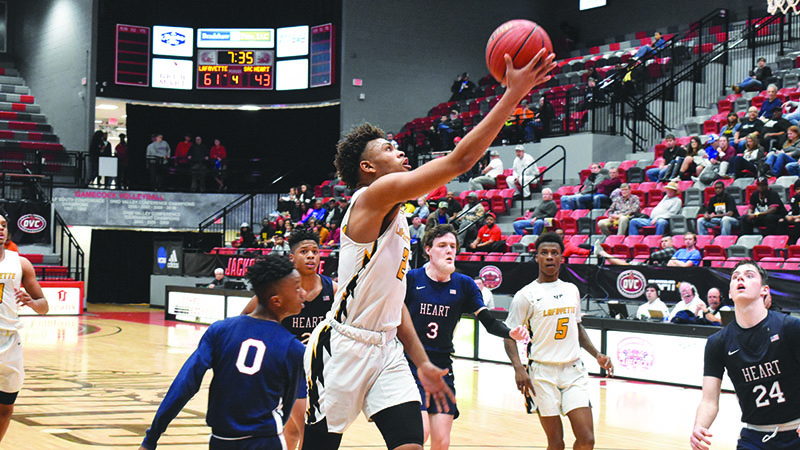 LaFayette senior Tae Burton finishes at the rim after avoiding a Sacred Heart defender with an Euro-step.-- Photo by Cody Estremera

When the LaFayette Bulldogs defeated Sacred Heart on Tuesday, it was more than just the win that sent the team to Birmingham for the first time in five years. It was a revenge game that showed just how far the Bulldogs have come 364 days later than the last time the two teams matched up.

In that game nearly a year ago, the Cardinals ended the Bulldogs’ quest for a state championship. It was a constant reminder to the Bulldogs they needed to get better. The final score was Jordan Wallace’s phone background for an entire year.

Senior star Tae Burton struggled in the game, finishing with just seven points and eight turnovers. To Burton, it was the push he needed to get ready for the 2019-20 season.

“That loss to Sacred Heart really drove me, because I was working hard but not the way I wanted to be,” Burton said.

Burton was already in the gym working on his skills, but what he hadn’t spent as much time on was getting his body in top physical shape. That changed with LaFayette’s last loss.

He took one day off before he got back to work.

“He’s been in the weight room and working on his body every single day said we lost to them,” LaFayette head coach Obidiah Threadgill said. “That’s the difference. Now, he’s shooting the ball from deep, he’s handling the ball with confidence and he is finishing around the basket.”

Burton spent most of the offseason working on his body. He got stronger and faster. To increase his foot speed, he did ladder drills, running hills and cone drills.

“It really helped me a lot with my footwork and stamina,” Burton said.

The hard work in the offseason has shown in the Bulldogs’ undefeated season. Burton has been the team’s top scorer for most of the year, averaging more than 20 points a game.

Threadgill said after December in the 2018-19 season, Burton just faded down the stretch because he just didn’t have the stamina to play his game for 30 games. He finished the season scoring about 13 points a game while shooting about 30% from the floor and about 60% from the foul line. His 3-point shooting was closer to 20%.

That is now a distant memory.

“That comes from me being more comfortable throughout the year,” Burton said. “Practicing with [his summer trainers] they made me more comfortable with my shot and believe in my game where I had to be.”

Part of his game he needed to get more comfortable in was being a vocal leader. Burton is normally pretty quiet during games, not allowing his opponents to get under his skin, so being more vocal was an adjustment.

That process started in the offseason as well as he worked with his trainers, who once played at LaFayette and played at the college level.

In Tuesday’s win, Burton finished with 18 points, seven rebounds and a pair of steals.