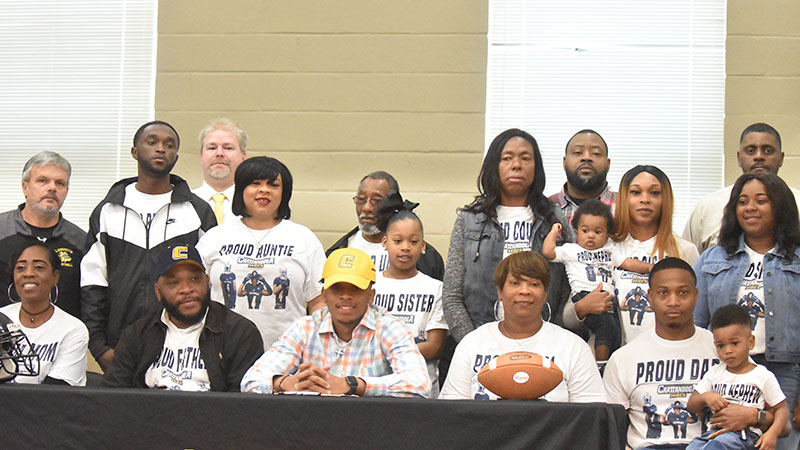 LaFayette defensive back Jordan Walker poses with his family after committing to UT Chattanooga.--Photo by Cody Estremera

In front of his teammates, his senior class, family and friends, LaFayette defensive back Jordan Walker signed his letter of commitment to the University of Tennessee at Chattanooga.

“They just welcomed me with open arms. It was the best fit for me,” Walker said.

The big reason Walker decided on UTC instead of Alabama State, Alabama A&M and Jacksonville State was the family atmosphere he felt when he went on his visit.

“It just felt like a second home from the day I stepped foot on campus,” Walker said.

He didn’t just base his decision off of his official visit though because teams make everything as perfect as possible during the official visit. He did his homework. Part of that homework was taking a visit during the week to see what the process was on a daily basis.

Walker will be a safety at the next level. Throughout the recruiting process, the coaches at Chattanooga told him he would be able to make an impact right away.

Walker brings an ability to read an offense, as he played quarterback at LaFayette his senior year. This allows him to be able to follow the ball and make an immediate play.

“I have great ball-hawking skills,” Walker said. “I feel that I can bring that to the next level and carry that over. I know that I’ll learn more techniques and be better coached. That will help me to improve my game.”

He announced his decision with a video of him playing football with his family, where his mother threw a pass that he intercepted and showed off his moves as he juked out the other members of his family en route to a touchdown.

“It just showed journey to where I’m at today,” Walker said. “I have a great support system behind me, and I couldn’t leave them out. I want to show what it took me to get here and who’s all with me throughout this process and journey.”