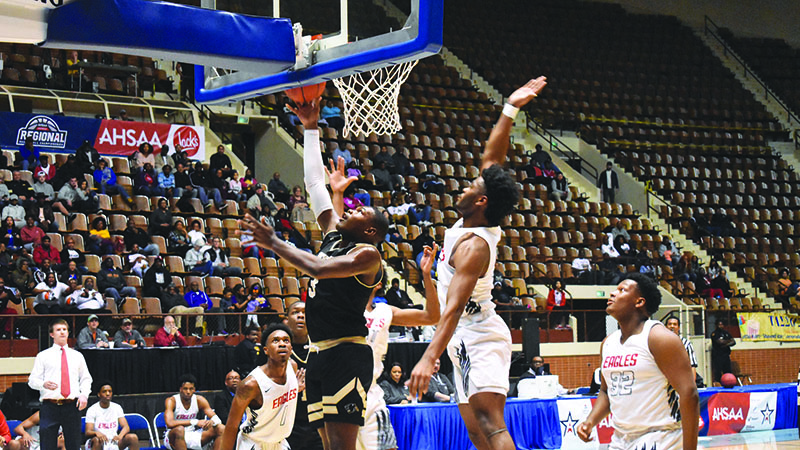 Lanett junior forward Tra Abner puts up a layup in the Panthers regional championship win against Cornerstone on Monday.-- Photo by Cody Estremera

The Lanett boys’ basketball team punched its ticket in the AHSAA Class 1A State semi-final game with its 82-52 win against Cornerstone Schools of Alabama.

“It’s magnificent,” Lanett head coach Richard Carter said. “It never gets old. It’s so great to get back to the Final Four.”

With Monday’s win, the Panthers have reached the state semifinals four of the last five years.

The Panthers started the game off slowly, missing shots from the inside that they normally hit and taking long-contested jumpers. They would go on spurts that would build start to build a lead, but the Eagles wouldn’ go away, ending the first quarter in a 21-17 Panther lead.

Things changed in the second, and it started with the Panthers bench.

The second group, which is also called the bandit group because of the wild way they play defense, put a stop to the Eagles scoring, allowing them to score their first field goal with about five minutes left in the quarter.

By the time most of the starters came back into the game, the Panthers’ lead was up to nine.

“We know that those guys can play,” senior guard Kristian Story said. “They do the same thing every day at practice. It shows we have depth and that we’re ready to go as a team.”

Once most of the starters came back into the game, the Panthers dominated, finishing the quarter on a 12-0 run.

The Eagles came out of the halftime break on a mission. They scored eight of the first nine points of the third quarter, cutting the Panthers’ lead to 14.

At the 6:04 mark of the third, the Panthers started to pull away. They started to score in the paint and knock down their free throws. In the third, junior point guard Kintavious Dozier, who had missed most of the first half because he was in foul trouble, started to find his stroke.

“He stepped up really big in the third quarter. I think he just relaxed,” Carter said. “He was pressing in the first half and shooting it far beyond the college 3-point line. I told him to just relax and get something at the rack.”

He was able to make a couple of 3-point shots and was able to get inside and score. At the end of the third, Lanett led 61-39. The Eagles scored just five points in the last 4:47 of the quarter.

“We did a great job coming out in the second half and taking the game away from them in the second half,” Abner said. “We know they’re a good team. If we let them get back into the game then we knew we’re going to have a long night, so we just went ahead and put it away in the third quarter.”

Dozier and Abner each finished with 14 points to lead the team. Abner also finished with seven rebounds, which was second on the team. Senior center Zameron Boozer, who finished as the 1A Southeastern Tournament MVP, finished with nine points and eight rebounds.

The Panthers will play Jacksonville Christian on Monday. Tipoff will be at 10:30 CT at the BJCC in Birmingham.