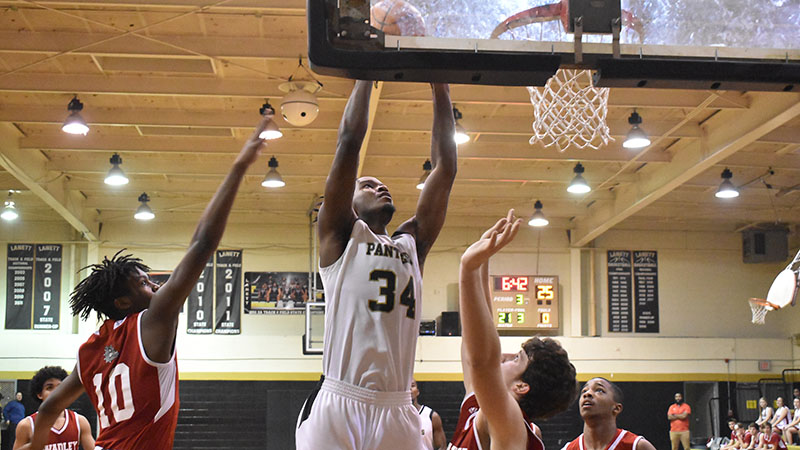 The Lanett boys basketball team defeated Wadley 80-30 in the first game of the 1A area 6 tournament.

“Its the first time we’ve really played a complete game period,” Lanett head coach Richard Carter said. “We came out with a lot of energy. We were really intense on defense. We rebounded really well and ran the transition the way we wanted to.”

The key to the win was defense. Lanett was able to force turnovers the entire night, which allowed for fast-break opportunities that the Panthers were able to convert.

“We shut them down,” Carter said.

When they weren’t forcing turnovers, the Panthers were able to win the rebounding battle. The Panther bigs were able to hit their guards on an outlet pass starting a fast break.

By halftime, the Panthers led by more than 20 points. This allowed Carter to bring in his bench to give rest to his starters throughout the game.

Carter believes practice was the reason the Panthers were able to play that first complete game of the season. Since the Lanett started the year late because of football, Carter was forced to backload his schedule. This meant the team was playing about three games a week for most of the year, which didn’t leave much time to practice.

“For the first time I saw the energy tonight,” Carter said. “I think that’s because we’ve had a couple of days that we can practice. We’ve been kind of slave whipping them a little bit trying to get them to the point that they understand what it takes to win a state championship.”

That energy was shown throughout the game. One example was with 5:20 left in regulation. Junior forward Tre Abner was able to collect a rebound and lead the break himself, finishing with a one-handed dunk.

The Panthers will host Notasulga on Thursday for the area championship game. It is scheduled for 7 p.m. EST.

“Thursday’s game is big because it keeps us at home next Tuesday,” Carter said. “The last time we went to the road, we had to travel to west Alabama, and we had a one-point loss over there. It’s important to be at home.”