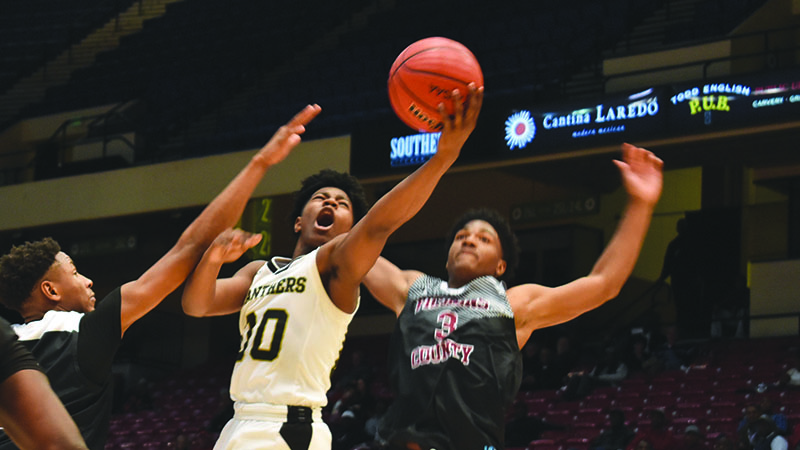 Lanett point guard Kintavious Dozier fights through contact on the way to the rim.--Photo by Cody Estremera

BIRMINGHAM — With seven seconds left in the game, the Lanett Panthers trailed by two points. Senior guard Quae Houston drove and pulled up from about 15 feet but missed. Senior center Zameron Boozer collected the offensive rebound but missed the tip in, which caromed off the rim the right corner.  It was collected by Kristian Story who drove to the rim and put up a shot that bounced off the rim and the backboard before falling in Pickens County’s Javion Belle’s arms for the game-winning rebound. The Tornadoes defeated the Panthers 57-55 on Thursday.

“They [Pickens County] played an outstanding basketball game,” Richard Carter said. “I also want to say about our team, I wouldn’t trade them for anything in the world. They gave me a dream of a lifetime. They brought me back to the final four and got us in the finals in my last game.”

Both teams struggled early in the game to score. The teams missed the first 14 shots of the game before Lanett broke the tie with a layup with 3:21 left in the opening quarter. The two teams scored 11 points combined in the first quarter, with Lanett holding a three-point advantage.

The Panthers, led by the Bandit group, came out hot to start the second quarter, scoring six points before the Tornadoes could answer. The lead got as high as nine before the starters reentered the game for the Panthers. Story hit a pair of free throws and Boozer threw down a dunk to build an 11-point lead with 5:22 left to play. The lead reached 13 points before the Tornadoes were really able to answer, but they answered with an 8-0 run to end the first half. Lanett led by five at the end of the first half.

The Panthers reclaimed momentum at the start of the third quarter as Houston scored five points in the first 48 seconds, making a layup and drilling a 3-point attempt.

Pickens County answered with a three of their own, but Lanett was on a hot streak, building the lead back to seven by the halfway point of the third quarter. It outscored Pickens County by two the rest of the quarter, taking a nine-point lead into the final eight minutes of regulation.

The Tornadoes opened the fourth quarter with a 6-0 run, cutting Panthers’ lead to just three points. The Panthers answered by scoring six points in the paint. The Panthers had an eight-point lead with five minutes left, then the Tornadoes took over.

The comeback started when Belle drilled a 3-point attempt.

“We turned the ball over in their press. We knew it was coming, but for whatever reason, we kind of got a little shook,” Carter said. “You can’t turn the ball over against a basketball team like that.”

Rebounding has been a huge advantage for the Panthers in their playoff run. That advantage disappeared in Thursday’s game. The Tornadoes finished with 10 more rebounds than the Panthers and held the Boozer brothers to just 16 rebounds combined. The next made basket was about a minute and a half later when center Jah-Marien Latham hit a 3-point attempt. This was half of the Tornadoes 15-2 run that lasted until the 1:39  mark of the quarter. The run gave the Tornadoes their first lead of the game.

Trailing by four with 99 seconds left in the game, junior point guard Kintavious Dozier made a layup to cut the Panthers’ deficit to two.

After a free throw, Cameron Boozer finished a layup to make the deficit to just one.

The Tornadoes added a point off a free throw, which finished the game’s scoring, as the Panthers missed three chances at the rim to end the game.

Rebounding had been a huge advantage for the Panthers in their four playoff games, but that advantage disappeared in the championship game. The Tornadoes outrebounded the Panthers 45-35 and held the Boozer brothers to a combined 16 rebounds.

“We did box-out drills all day for a day and a half,” Pickens County head Marcuss Barnes said. “We have some really long guards for 1A, and we knew they were going to have to help rebound. Our guys were able to help Jah-Marien out.”

For the second straight game, the Panthers struggled at the free-throw line, missing nine of their 18 chances.

The Panthers also struggled behind the arc, making just 28.6% of their 3-point shots.