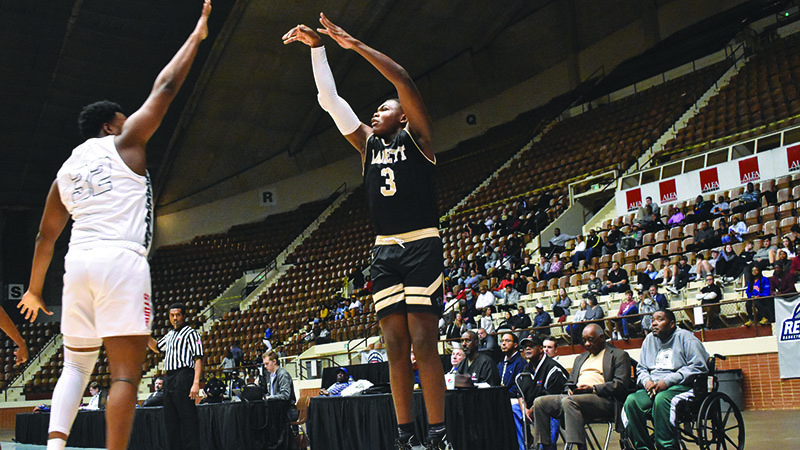 In Lanett’s regional championship win against Cornerstone, junior Tra Abner was one of the most important players on the floor for the Panthers, but that’s nothing new. He’s been a constant force for the Panthers all year.

Abner was one of the Panthers’ five starters as a sophomore, but in his junior year, he’s moved from starter to sixth man depending on the way head coach Richard Carter wants to attack matchups.

“Just based on who we are playing determines who will start, either Tra or Quae Houston,” Carter said.

This transitioned Abner’s role to the sixth man.

“If I start, I contribute. If I come off the bench, I’m still going to contribute,” Abner said. “I think I play well as a sixth man or as a starter.”

When he was moved to the bench, Abner didn’t let that affect his play. He stayed engaged and was ready whenever Carter called his name.

“You don’t know when it’s your time or when the coach is going to call you, so you can’t sit on the bench and pout,” Carter said. “Tra Abner knows he’s going into the game, and when he gets in, he comes in and gives whatever he can to get the job done.”

Abner provides a big boost for the Panthers’ second group. Standing at 6-foot-3, he provides a serious rebounding advantage for the second team. He is also one of the bench’s consistent scorers.

“He’s big for that second group because he’s a rebounder,” Carter said. “He can rebound, post up and he can shoot the 3-ball. His overall energy makes him very, very valuable.”

Alongside his scoring ability, Abner is able to transition between the starting group and the energetic second-team referred to as the ‘bandit group,’ which Carter says is huge because not all of his starters can make that transition.

“There are players on my first group that can’t play with [the second group] because they don’t have that level of energy,” Carter said.

In his previous game, Abner was a force for the Panthers off the bench. He shot 50 percent from the floor and made four of his six free throws, totaling 14 points, which was tied for the game-high. He also added seven rebounds.

“It felt good because I started off pretty slow,” Abner said. “I just wanted to come out and play strong because we didn’t make it [to Birmingham] last year.”

The Panthers play Jacksonville Christian at 10:30 a.m. in Birmingham on Monday.