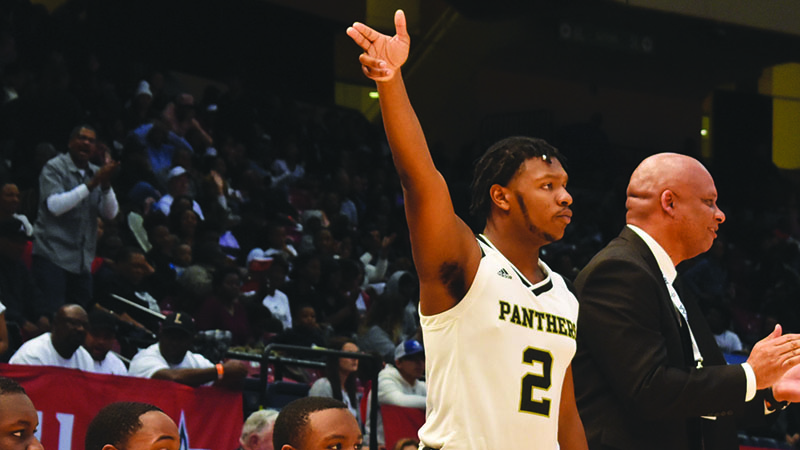 Lanett senior center Brandon Smith points the direction of the possession arrow after a jump ball.--Photo by Cody Estremera

BIRMINGHAM — When the clock hit triple zeros of the 1A State Championship game, the Lanett Panthers finished their season with a heart-breaking two-point loss to Pickens County. The Panthers had the ball down, down two, but they couldn’t get the shot to fall.

The Panthers had five seniors on their 2019-20 basketball team. All five players won at least one ring in their four years at Lanett.

“Before our class started to play varsity, our school had not won a football or basketball state championship. For us to win three in basketball and two in football, it just makes me feel good to know we were the ones who set the standard for Lanett athletics,” senior guard Kristian Story said. “I just take pride in knowing that we help build the Lanett athletic brand.”

“I’m really proud of all of these young men and what they have done in the past,” Lanett head coach Richard Carter said.

Story and Houston played most of their careers, but with the depth at the center position, the Boozers had to wait their turn.

They rewarded Carter in their final year, especially in the playoffs, dominating teams on the glass.

“I know they feel really bad right now because they were hoping to deliver another state championship to the people back home, but it didn’t happen,” Carter said. “They’re going to walk off of this basketball court with their heads up, knowing they contributed and we had a great season.”

All five of the seniors on the Panthers’ roster will move onto the next level. Story will play football at the University of Alabama. Houston and Smith each have college prospects for football. The Boozers will play basketball in college. They will narrow down their decision in the next month.

The senior class finished 81-29 in their four-year careers.