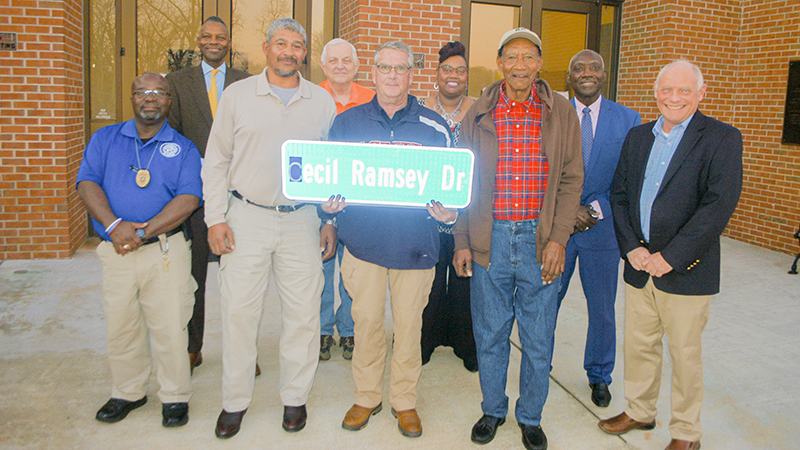 There’s a new name for a street in the West Shawmut community. 22nd Avenue SW has been officially renamed Cecil Ramsey Drive. Mr. Ramsey (in front at right) was told the news at Monday’s meeting of the Lanett City Council. He has done roofing work for more than 60 years and has owned his own business since 1962. He and son Shawn Ramsey took a break from a roofing job to attend the meeting. “I’ve got to get back to my crew,” he said just after the photo was made. “They are still on the job.” Shown above, from left, are City Inspector Teddy Morris, Shawn Ramsey, Lanett Fire & EMS Chief Johnny Allen, Cecil Ramsey and Mayor Kyle McCoy. In back, left to right, are council members Tony Malone, Charles Looser, Angelia Thomas and Jamie Heard. --Wayne Clark

LANETT — Cecil Ramsey has been doing roofing work in the local area for more than 60 years. His dad, the late James Ramsey, taught him how to do it and he has owned his own business for 57 years. He’s probably been on more rooftops in the Valley area than any other living person, and now he has a city street named after him.

At Monday’s meeting of the Lanett City Council, a resolution was unanimously approved to rename 22nd Avenue SW “Cecil Ramsey Drive.” It’s the street in the West Shawmut neighborhood that passes in front of his home.

“There’s no one more deserving of this than Mr. Cecil,” Mayor Kyle McCoy said. “He guarantees that all his work is done right. In this day and time, that’s not always the case, and it speaks well of his character. Cecil, we are very proud to call you a resident of the City of Lanett.”

“I want to congratulate you on this special day,” said Council Member Tony Malone.

“This is well deserved. We thank you for the good work you have done for many years now. We appreciate all you have done.”

“I am so pleased we are doing this,” said Council Member Angelia Thomas. “Mr. Cecil, I just want you to keep on being you.”

Council Member Jamie Heard agreed that Mr. Ramsey was deserving of the honor and couldn’t wait for the new street signs to be going up.

“I appreciate this so much, and I appreciate the work being done by the mayor and council,” Ramsey said. “You all just keep up the good work on behalf of the people of Lanett.”

Mr. Ramsey and his crew have roofed every new home built by the Chattahoochee Fuller Center Project (CFCP) in the Greater Valley Area and has done it at no cost.

The CFCP provided the materials, and Cecil Ramsey Home Improvements did the work at no charge.