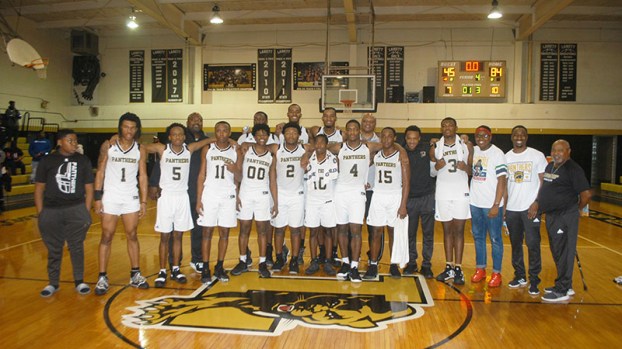 The Lanett Panthers celebrate winning the 1A area 6 championship on Monday.--Photo by Wayne Clark

After taking care of business on Tuesday against Wadley, the Lanett boys basketball team was able to dominate Notasulga 84-45 winning the 1A area 6 championship.

The 39-point win was the Panthers’ largest win of the season against the Blue Devils.

The Panthers were able to jump out to an early lead that they were able to ride throughout the course of the game.

Just as it was on Tuesday, the Panthers’ defense was the reason for the hot start.

“I thought we played really well defensively tonight,” Carter said. “This is the time of the year where it’s now or never. You have to be at your best or go home.”

Another big difference in the game was the return of guard Kristian Story. The senior had been sidelined for the last two weeks with a health issue.

He was able to rejoin the team’s practice on Monday.

“We’re practicing harder right now than we have all year because we know that these are the games that really matter,” Carter said.

The Panthers will host Cornerstone Schools of Alabama on Tuesday, Feb. 11 at 8 p.m. EST.

Just like it did on Tuesday in its come from behind victory against Beauregard, the Valley girls basketball team jumped... read more