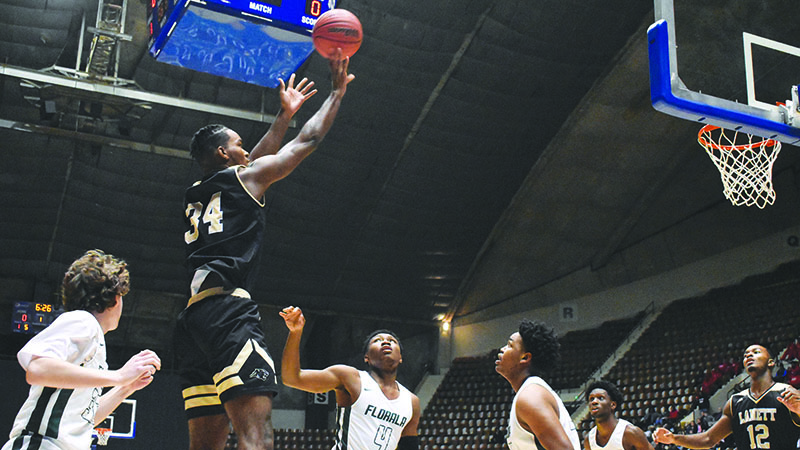 Lanett center Cameron Boozer shoots a jumper from just outside the paint in the Panthers win against Florala. --Photo by Cody Estremera

MONTGOMERY — The Lanett boys’ basketball team continued its dominant playoff run on Thursday, as it knocked the No. 10 Florala Wildcats out of the playoffs with an 87-50 win.

“We wanted to come out and get a fast start,” Lanett head coach Richard Carter said. “They have a couple of guys that can shoot, so we wanted to take that away from them. We did a  good job on [Rashaad Coleman] who is their go-to guy.

The Panthers came out of the gate hot, outscoring the WIldcats  25-13 in the opening quarter. They started the game on an 8-0 run, which became a 15-5 lead by the 5:02 mark of the quarter.

“One of the coaches from Notasulga said to us ‘coach, that’s why y’all are the champs because y’all know when to turn it on.’ The guys have turned it on,” Carter said.

The Panthers powered through the Wildcats half-court set, constantly getting inside. Once they were inside, they were able to use their height advantage to score easily around the rim.

“I knew they couldn’t handle us on the inside,” Carter said. “We took some 3-balls that we shouldn’t have taken because when they come over to the side, they kept telling me ‘coach it’s too easy.”

Even though it led by 11 at the half, Lanett came out focused on putting the game away early in the second half.  The Panthers dominated the start of the second half by going on a 22-3 run.

“That is probably the most essential quarter of the second half,” Carter said. “If you come out and take over in the third quarter and make sure that you built on what you’ve already done, then you can pretty much control the ball game.”

Lanett outscored Florala 24-8 in the third quarter. The key to the hot second-half start was the Panthers’ ability to cut off the Wildcats’ shooting in the quarter. Florala, who is normally a heavy 3-point shooting team, attempted just five 3-pointers and made only one. Overall, the Wildcats made just three shots in the quarter (3-of-10) while the Panthers finished 9-of-18 in the third.

“That’s our motivation is to get four (state championships) in five years,”  Carter said.