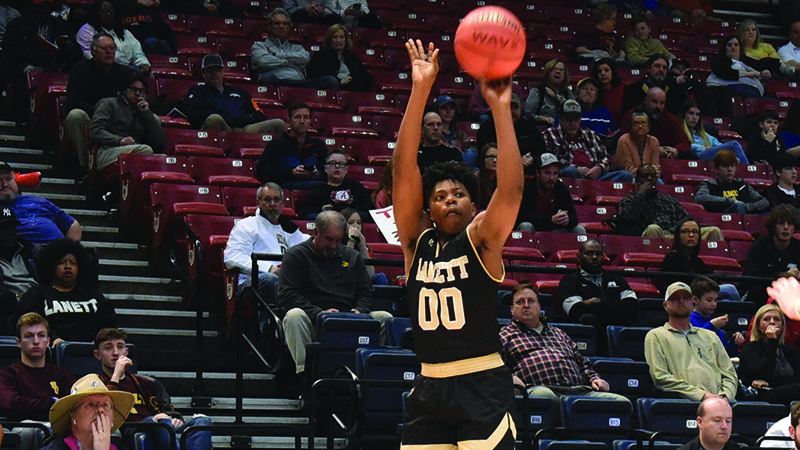 The Lanett boys basketball team has been one of the more dominant teams throughout the last four years, winning three state championships. Those teams scored the bulk of their points in the paint.

Teams tried to combat the Panthers inside scoring by packing in a zone, leaving room on the outside for the Panthers to shoot 3-point attempts, which wasn’t their strength. Now, they don’t need to worry about that defensive tactic because of junior guard Kintavious Dozier.

“We had some people that could shoot, but I always said I need some makers. He came in as one of those people that can make shots,” Lanett head coach Richard Carter said. “You pack the zone in now, and you’re liable to get 50 points put on you before you know it.”

Dozier joined the Panthers after two years at Valley High School, where he finished his sophomore season averaging 12.7 points a game.

“I just came over here and made the best of the opportunity,” Dozier said.

He transferred to Lanett during the school year. Even though he knew most of the basketball team, he didn’t have a chance to build a rapport with them on the court because most of them were playing football.

“I already knew them, but I wasn’t seeing them every day. When I first came in, it felt like I was from my own little country,” Dozier said. “They all showed me love and made me fit in like family on the first day [of the season.”

He took his game to another level as a junior finishing the regular season as the Panthers’ leading scorer, consistently scoring more than 20 points a game.

Whenever the Panthers have needed him, he has been a spark on offense. Against LaFayette on Jan. 17, he dueled LaFayette senior Tae Burton. Burton finished with the win, but Dozier scored 39 points.

“[Stepping up in big games] means a lot to me, but I’m not all that worried about it,” Dozier said. “All I’m worried about is the team’s success. I just go out there and give 100%.”

That offensive jump might surprise people, but it doesn’t surprise anyone that knows the junior. Dozier is constantly working on improving his game. While the junior varsity boys and the girls’ teams are playing, Dozier sits courtside with a basketball, constantly dribbling the ball.

Before practice, Dozier grabs cones from Carter’s office and is working on his ball-handling skills, dribbling a ball that is covered by a plastic bag. The bag makes the ball more uncontrollable, which forces the handler to focus on their dribble more.