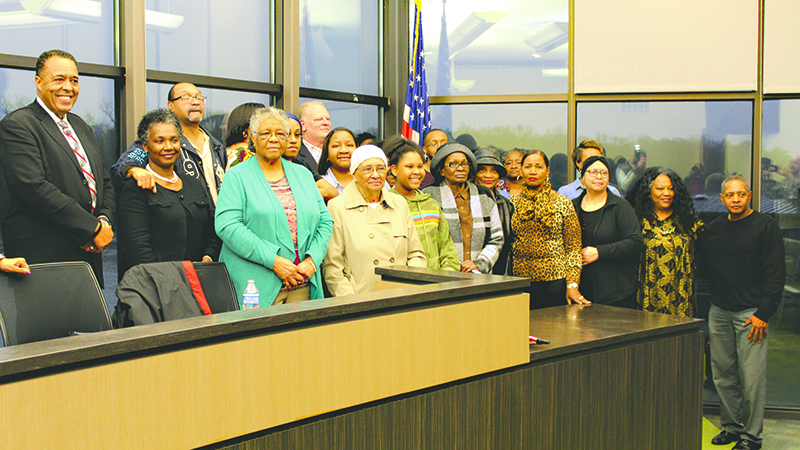 It was standing-room-only Monday evening at the West Point City Council business meeting as a former and longtime councilman was honored.

Mayor Steve Tramell announced the new roadway that will connect Kia Parkway and Kia Boulevard will be called Donald Gilliam Street after the former councilman. The motion was met with a standing ovation. The road is at the site of the new Travel America Truck Stop, which is currently under construction near Kia Motors Manufacturing Georgia.

With several members of the Gilliam family in attendance, each councilperson took a moment to talk about how Gilliam impacted the city and their personal lives.

Councilman Henry Hutchinson said he was honored and proud to have met Gilliam in person, and he looks forward to more ways the city will honor his legacy.

“It will take a lifetime to honor a guy this big,” he said.

“If you didn’t know Donald, you missed the opportunity of a lifetime,” she said.

Councilwoman Deedee Williams talked about Gilliam’s efforts to bring the community together. “Hopefully, we will see something of greater significance named in his honor in the future, not to belittle this, but certainly, hopefully, [this is] the beginning,” Williams said.

Councilwoman Gloria Marshall credits Gilliam for her being on the council. She said he used to come to all the meetings and work sessions, and one day Gilliam stopped by her house and asked if she considered running for office. When she told him no, he didn’t say anything else until the next reelection year.

“So, he stopped by my house and he said ‘you’re running this year and I’m going to help,’” Marshall said.

Councilman Joseph Downs served with Gilliam the longest on the council and spoke to how Gilliam would handle an upset citizen at a council meeting.

“Mr. Gilliam was very gentlemanly with them,” Downs said.

Also on the agenda Monday was the appointment of seats to the Troup County Board of Elections and the Parks and Recreation Board. The council also considered water and sewer refunding, solar improvements on The Ray, a traffic calming program and adjustments to the 2019 budget.

Two candidates were vying for the board of election’s spot, the incumbent, Dianne Davidson and Detrick Higgins.

Hutchinson made the motion to appoint Higgins to the board on a three-year term. Councilman Gerald Ledbetter said the council had heard from leaders in the community to hold things the same and how hopeful he was that both Davidson and Higgins would continue to serve.

“I would love to see both of you serve in many ways in our city,” he said. “I hope that whatever happens tonight doesn’t discourage either one of you from moving forward and continuing to serve the city.”

The council then voted unanimously to appoint Higgins to the open seat.

Higgins is a resident of West Point and according to the application he submitted on Jan. 13, he is retired and a deacon at Mt. Herman Baptist Church in Lanett.

Councilwoman Gloria Marshall then made a motion and the council voted unanimously to appoint Alton Pitts to a three-year term on the parks and recreation board.

The council then moved on to water and sewer debt refinancing.

The city will refinance $16,876,728, putting it in a position to lower the interest rate, creating a savings of about $1.6 million.

The council also approved the traffic calming program, The Ray solar improvement and the 2019 budget amendment. The council will meet again at 5:30 p.m. on Thursday, March 5.