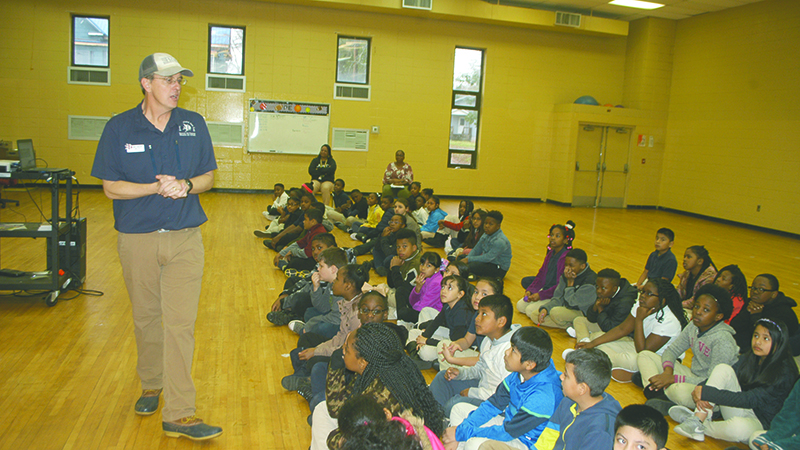 On Tuesday, children from W.O. Lance Elementary School were fascinated by what creatures from the deep looked like. Greg Graeber of the Dauphin Island Sea Lab brought plenty of preserved specimens with him as he talked about life just off the coast of Alabama. The children could hold creatures they wouldn’t want to come across on a visit to the beach, such as sharks, jellyfish and rays. --Wayne Clark

LANETT — Students from W.O. Lance Elementary School on Tuesday leaned about an amazing undersea world just off the Alabama coast.

Greg Graeber, a marine educator with the Dauphin Island Sea Lab, had several tables filled with preserved specimens gathered from the Gulf of Mexico and talked about them to different classes of children.

The Dauphin Island Sea Lab was founded by the Alabama Legislature in 1971 to provide marine science programs for many of the state’s colleges and universities. Today, 23 member institutions partner with the Dauphin Island Sea Lab to provide studies to undergraduate and graduate students. Since its founding year, the DISL mission has expanded to include K-12 education, professional development and a public aquarium.

“Most teachers try very hard to bring science from out there to here,” Grabber told a group of fourth grade children. “My job is the opposite. It’s to take you out to know where the science is. We also work with elementary teachers in workshops. We can take them to all kinds of cool habitats.”

In the last 11 years, the Dauphin Island Sea Lab has tagged and released over 15,000 sharks.

“We study everything from plankton to the bottlenose dolphin, the only whale you will ever see on the gulf coast,” he said.

Graeber grew up in Jackson, Mississippi and has been curious about sharks since he was very young.

He told the kids that there were all kinds of unusual life forms living in the sea, just 0ff Alabama’s coast. He cited the flounder as an example. Most people know of it as a very tasty item in a seafood restaurant. In its natural habitat, it lays on the bottom of the sea and feeds on what comes to it. At hatching, the fish has an eye on each side of its head like most living creatures do but as it ages, one of the eyes migrates to the other side. This gives two eyes on the side that always faces up, giving it better defense against predators as it is lying on the sea floor. It also has the ability to camouflage itself, giving itself more protection against predators.

Graeber said Alabama has more biodiversity than any other state other than California, which is much larger.

“In the 300 miles from the mountains of north Alabama to the coast, there’s more types of living things than in almost any other state,” Graeber said.

The reefs found off the Alabama coast are very different from the famed coral reefs found in other parts of the world. Basically what they are is what’s better known as an oyster bed, and they have been in trouble for the last 15 years or so.

“The combination of Hurricane Ivan in 2004 and Katrina in 2005 damaged them, and then we had a drought right after that,” Graeber said. “The drought caused sea snails to come near the coast, and they killed lots of oysters. In 2010, the Deepwater Horizon (oil rig) disaster in the gulf caused more damage and a red tide in 2014 meant more trouble. All this has damaged our oyster population.”

Graeber added that the world’s sea turtle population is at risk because of man-made products they are ingesting. Items that get washed into the sea like mylar balloons, plastic bags, GI Joe dolls and so on can kill them if they gulp them in. Many museums near the ocean have displays of items that have been found inside sea turtles that were found dead.

“There’s a lot of stuff getting into the oceans that can kill them,” Graeber said.

The children were asked what they thought were more numerous, living creatures with backbones or living ones without them.

The invertebrates — the spineless ones — vastly outnumber the ones with backbones.

Graeber described the sea cucumber as one of the most amazing creatures on the planet. They live on the sea floor and resemble the cucumbers that grow in gardens.

“He can turn his whole body into liquid ooze and then reassemble it when danger is passed,” he said.

Graeber said he witnessed this while teaching a class near the coast. He found a sea cucumber while scuba diving and brought it back to the class for discussion.

When he got out of the water, the sea cucumber he had been holding in his hand had covered an entire arm in ooze. He scraped it off on a rock and joined a discussion on seahorses. When he returned to the rock, he found that the sea cucumber had gotten itself together again and was slinking back to the water. Graeber said the seahorse was unusual in that the male of the species gives birth to the young. When it comes to crabs, the female gives birth.

“She will put out anywhere from two million to ten million babies at a time,” he said. “Out of that many, only one or two will grow to adulthood.”

Graeber said the kind of crab depicted on the cartoon “Spongebob” is accurate in that they have one eye and an antenna.

He said there’s an “Alabama way” of telling their sex.

“The girls are from Montgomery,” he said. “They have something that looks like a capitol dome on their belly. The boys are from Huntsville. They have the shape of the Space Shuttle on their bellies.”

Graeber said one type of sea creature you want to stay away from is the Portuguese Man of War. It’s a type of jellyfish whose sting is excruciating in the extreme.

“It can wrap around your leg and sting you hundreds of times,” he said. “That’s what got my wife in the Keys. She was later stung by a sea nettle. That’s what turned her whole leg, black, blue and red.”

The Dauphin Island Sea Lab has a mission encompassing the pursuit of excellence in marine science education, marine research, coastal zone management policy and educating the general public through its Estuarium, its public aquarium.