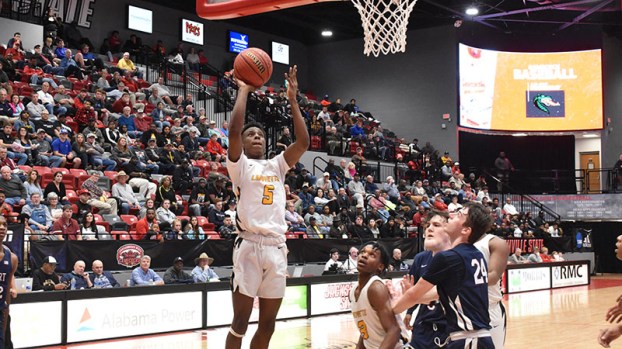 While Corey Boston and Tae Burton get a lot of credit for the LaFayette boys’ basketball team’s success this year, the Bulldogs could be in a different spot if it weren’t for senior guard Markevious Moore.

“He plays a major role, but he doesn’t get the recognition he deserves,” Boston said. “Every night, he’s going to go out there and guard the other team’s best player … Playing with him, it’s just amazing and I’m just blessed to have a guy like him on my team.”

Moore is the team’s best defensive player. To start every game, he lines up against the opponent’s best player. That started his junior year.

In his first two years of high school, Moore didn’t play a whole lot of defense, usually just focusing on the offensive side of the ball. Then, he transformed his game as a junior and became a leader on the team. That’s when he started to push himself to be a better defensive player.

When the Bulldogs played Lanett in 2019, Moore was put on Kristian Story, one of Lanett’s best players.

“I had a breakout game,” Moore said. “After that, they started calling me Corey Brewer and Tony Allen. I started to push myself more on defense, so I could be like those types of guys.”

Some guys with Moore’s offensive skill set might shy away from becoming a defensive force, allowing for the team to slow down the opponent’s best player. Moore wanted the challenge.

“I always accept the challenge. I won’t ever back down to it,” Moore said.

Alongside his defensive skill, Moore is a guard that can score from anywhere on the floor. He has the ability to shoot from beyond the arc and can drive past his man and score in the lane. He is also one of the Bulldogs’ best players in transition, as he consistently is able to start and finish a break.

“He’s so important to our team because not only can he score at a high level, he can play without the ball,” LaFayette head coach Obadiah Threadgill said. “He plays egoless. If he scores two points or 18 points, you’re going to get the same kid.

“For him to be as offensively talented as he is and not score a lot of points because that’s not his role on this team, it doesn’t affect him.”

If he were on a different team, Moore could be at the top of the stat sheet every night, but that’s not his role on this LaFayette team.

Moore and the rest of the Bulldogs play Barbour County on Monday at 4:30 CT in Birmingham.

The Valley baseball team feels like it can make a run in the state playoffs when it comes around in... read more