Piece of cake: Special hospital replica cake made for anniversary 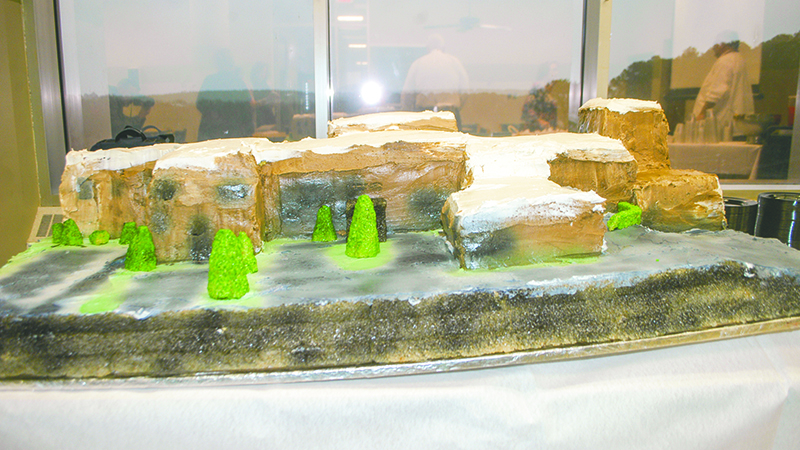 It took Fran Irmiter and his cafeteria crew over ten hours to make the above 70th anniversary cake for EAMC-Lanier Hospital on Wednesday and Thursday. IOnce they started cutting slices of it at the 10 a.m. ceremony, everyone wanted a piece. --Wayne Clark

VALLEY — The centerpiece for Thursday’s anniversary celebration at EAMC-Lanier was a huge cake in the shape of the hospital. It was about four feet wide and three feet across. It was ingeniously made by Fran Irmiter, head of dietary services, and his staff.

“We spent about four hours on it yesterday and six hours this morning,” he said. “We used 70 pounds of butter cream. Everything’s edible except the board it’s on. We divided it up into flavors.”

The nursing home wing was chocolate, the main hallways yellow, the administrative wing pound cake, the ancillary wing and patient floors were white, the surgical wing lemon bar, and the environmental and engineering areas red velvet. The hospital grounds and trees were made of Rice Krispies. Edible food coloring was used to make the grass and trees green.

“We want to thank Fran and his team for doing the cake,” Hospital Administrator Greg Nichols said. “Everyone here is welcome to get a slice. We will be serving it throughout the day. We want everyone to have a good time today as we celebrate 70 years in the local community.”

Lanier Memorial Hospital opened as a local healthcare facility on Jan. 18, 1950. It had been in the planning stages since 1942, when certification procedures began. A site overlooking the Chattahoochee River in the Langdale community was selected and an Atlanta architectural firm chosen for the design. In 1949, the hospital’s board of trustees decided to name it in memory of the long-time president of the West Point Manufacturing Company, George H. Lanier, who had passed away the previous year.

An opening ceremony took place on Nov. 16, 1949, to mark the completion of the nation’s first community hospital funded by the 1946 Hill-Burton Act. The bill’s co-sponsor, Alabama Senator Lister Hill was present for the ceremony. He and U.S. Surgeon General Leonard A. Scheele spoke at the ceremony. Among those in attendance were Alabama Gov. James E. “Big Jim” Folsom and Georgia Gov. Herman Talmadge. A crowd estimated in size at 5,000 people was present and portions of the event were carried live on ABC radio affiliates.

Some local Boy Scouts raised the U.S. flag to open the festivities. The flagpole in front of the hospital is in that same location today.

An open house was held at Lanier Memorial Hospital on Jan. 14-15, 1950. Mildred Bishop was admitted as the first patient on Jan. 18.By the end of the first week, a total of 103 patients had been admitted to the hospital.