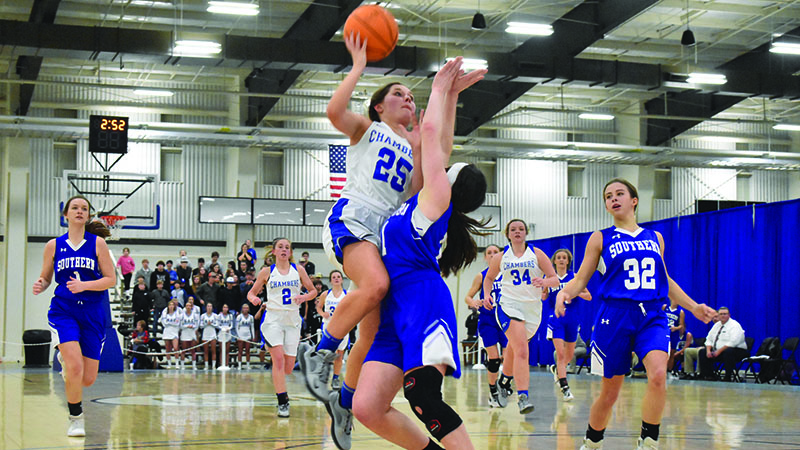 Chambers Academy senior Shelly Keebler rises up for a layup in the Rebels’ championship loss.-- Photo by Cody Estremera

The AISA All-Tournament teams were announced on Thursday, and four players from Chambers Academy were named to the squad.

On the girls’ side, senior guard Shelly Keebler and junior center Britten Stephens were both named to the class A tournament team.

In the Rebels three playoff games, Stephens led the team in scoring, averaging 12.6 points a game, while scoring 18 points in the Rebels’ championship loss.

Keebler was a consistent threat for the Rebels during their playoff run. She averaged just under 10 points a game. She had her biggest game of the playoffs when it mattered most, scoring 17 points in the championship game. She was able to knock down five 3-point shots in her final high school basketball game.

On the boys’ side, senior Raphe Daniel and junior Payton Allen were selected to represent the Rebels on the all-tournament team.

Daniel was a force for the Rebels. He scored 35 points in Chambers’ three playoff games, which includes a 24 point game in the Rebels’ quarterfinal win against Wilcox. In the two overtime periods, Daniel scored 11 of the Rebels 15 points.

Allen was an offensive terror for the Rebels, scoring 66 points in the Rebels three playoff games. His best game was in the Rebels quarterfinal win against Wilcox. He finished with 29 points, 10 rebounds and 12 assists in that game.

Eighteen of his 29 points were scored in the fourth quarter in that game.