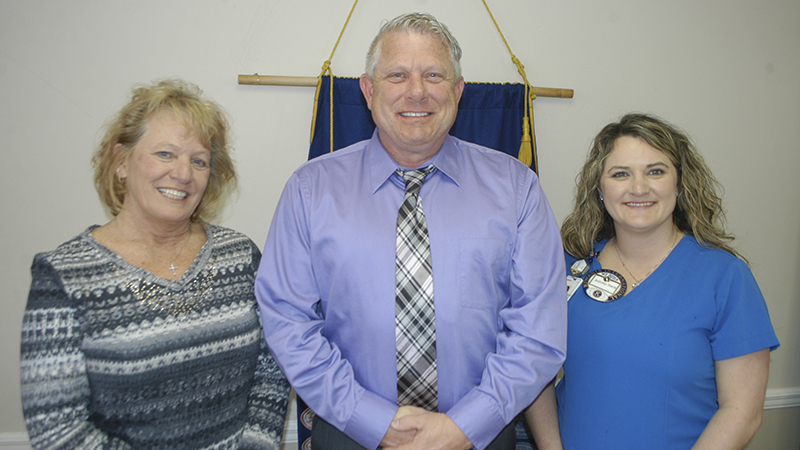 VALLEY — Shannon Frailey, a candidate for Chambers County Revenue Commissioner, was the guest speaker at the Wednesday noon hour meeting of the Kiwanis Club of Valley. He talked about his career in law enforcement and some improvements he’d like to see in the office of revenue commissioner.

Shannon Frailey said Wednesday that he was proud to have served the people of Chambers County as a sheriff’s office deputy for the past two decades. In that span, he has risen from a deputy to a K-9 handler and now an investigator. He played a key role in busting two major theft rings in both Chambers and Troup counties. A computer chip confiscated in a raid in northwest Chambers County led to more arrests in Troup County.

Frailey said that this all started with an investigation into a stolen car and grew from there. Complex arrests like busting a major theft ring happen because officers don’t see their work as a 9 to 5 job.

“We are there until the job is done,” he said.

Frailey said that running for this office was not an overnight decision.

“I had been considering doing it for two years,” he said.

“In my experience in county government, I have seen some things in the revenue commissioner’s office that need to be changed.”

He said that there’s a major need for cross training within the office.

“Time is money,” he said. “When people take off work to go to the revenue commissioner’s office only to be told that the person they need to talk to isn’t there and they need to come back another day, that’s not good. There should be somebody there to help them with their problem any time they go there. I think the lady in the revenue commissioner’s office is doing a great job, but I do think there’s a need for cross training.”

Frailey said he had talked to a man from Five Points that this happened to.

“He went to the revenue commissioner’s office to talk about a problem he was having and was told he’d have to come back another day because the one person who knew what to do was not in the office that day,” he said.

“When you go to that office, the people who work there should know how to help you.”

Frailey said there were elderly people living in the county who are still paying property taxes but shouldn’t be.

“That $400 a year they are paying to the county could better serve them in other ways,” he said.

As a trained law enforcement officer, Frailey said he is a strong believer in safety.

He said that it’s risky for appraisers to go on people’s property without letting them know in advance they are going to be there.

Frailey said that he pays his Chambers County property tax in the Courthouse Annex in Lanett and that it sometimes takes more than 20 minutes to get it done.

“Time is money, and this needs to be done faster,” he said.

“I’d like for the county commission to put in a drop box for people to do this at their convenience. There’s walking and standing in line. This can be tough on elderly people.”

Frailey said that as an outsider he has seen things that need to be improved.

“I think I can do more on the inside should I be elected,” he said. “There are numerous exemptions allowed by state law. I think people should have everything they qualify for.”

Counting the revenue commissioner, there are eight people working in that office.

That’s almost as many that’s working in Troup County, a much more populous county.

“I know that everyone in the office is busy during tax season, but the period from April to October would be good for cross training,” Frailey said. “Everyone needs to know what the other person does and can fill in for them when they are out. People should be treated the right way and promptly.”

Frailey concluded by saying there’s one big difference between him and the incumbent.

“I don’t need this job,” he said. “I want it. That’s the difference between me and my opponent.”

He added that his seeking the office is similar to what Donald Trump did in 2016.