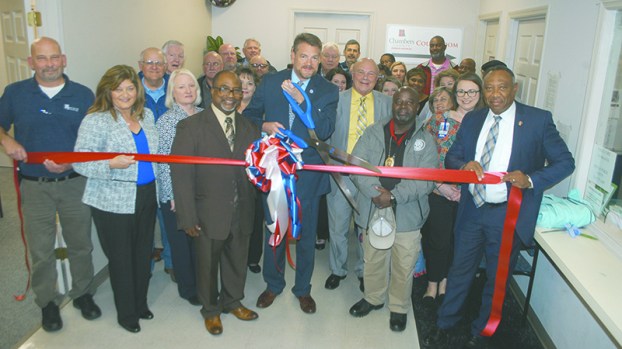 On Thursday, the Greater Valley Area Chamber of Commerce hosted a ribbon cutting for the new Chambers County Veterans Service Office. It’s located on the second floor of the Lanett Courthouse Annex and is open from 8 a.m. to 4 p.m. EST on Tuesdays and Thursdays. To talk to a representative, call (334) 755-5729. Shown above cutting the ribbon is Kent Davis, commissioner of the Alabama Department of Veterans Affairs. Present for the event were Chambers County commissioners Doug Jones, Debra Riley, Sam Bradford, David Eastridge and Charlie Williams, State Representatives Debbie Wood and Bob Fincher and Valley Mayor Leonard Riley. --Wayne Clark

LANETT — Despite a driving rain on Thursday afternoon, there was a good turnout at the Chambers County Courthouse Annex to officially open a new Veterans Service Office (VSO) for Chambers County.

Chambers was one of 17 Alabama counties to lose their VSO during state spending cutbacks following the 2008 recession. There’s more funding for such programs now, and ten such offices are slated to reopen in the coming year. The Lanett office is the first of 10 new offices to reopen around the state. This will build back the number of Veterans Service Offices to 60. The next step will get that number back to 67, or one for every county in the state.

Lanett Building Inspector Teddy Morris said that Mayor Kyle McCoy was in a meeting in Montgomery on Thursday and could not attend. He said he was pleased to see this new office opening in Lanett and was confident that it would help lots of local veterans and their families.

“This is a great day for Lanett,” Morris said.

“We have over 2,400 veterans in Chambers County,” Wood said. “It’s very important for them to have some place to go in Chambers County. Rick Elliott was here for a long time and did a good job. I’m glad this office is reopening.”

“I didn’t realize veterans who live in Chambers County had to travel out of the county to get help with their benefits,” said State Rep. Fincher. “I hope this office will help veterans for many years to come. There is no more deserving a group of people than our veterans.”

The office will be open from 8 a.m. to 4 p.m. EST on Tuesdays and Thursdays. It will be temporarily staffed by two men from the state VA office in Opelika.

“We are in a hiring process right now,” said Kent Davis, commissioner of the Alabama Department of Veterans Affairs.

“We will be hiring someone for a permanent position who is a Chambers County resident and a veteran. We are here to serve veterans, and we are proud of that. We are one of the top states (per capita) in terms of receiving funds for veterans, and we are proud of that. In fiscal year 2018, $26 million flowed into Chambers County to help veterans. This office will enhance that even more. Statewide, we received over $3 billion for veterans.”

“We are planning on opening a new one in Enterprise,” Davis said.

“That should get us up to around 900 veterans in these homes. In one of these homes, we have a veteran who is 100 years old and served in World War II, Korea and Vietnam. We like to take them on outings. One group recently traveled to the World War II Museum in New Orleans.”