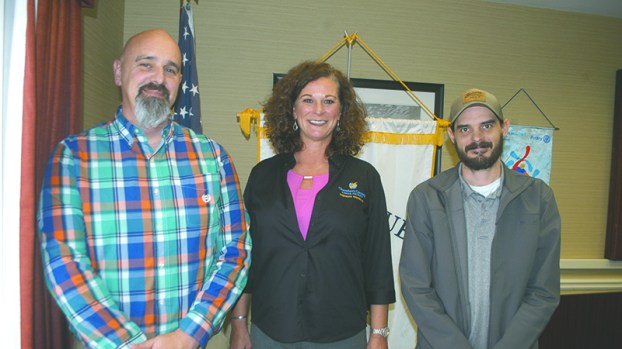 Members of the West Point Rotary Club heard a discussion of ever-changing technology in the classroom and school safety measures at Thursday’s noon hour meeting. At left is Michael Sanders, the school’s technology coordinator, and at right David Brooks, the IT specialist. At center is club member Dr. Kelli Hodge, program chair. --Wayne Clark

LANETT — Michael Sanders, the technology coordinator, and Daniel Brooks, the IT specialist for the Chambers County School District, were the guest speakers at Thursday’s noon hour meeting of the West Point Rotary Club.

They talked about how modern technology had totally transformed the classroom from what it was just a few years ago and the constant efforts it takes to keep up with it. Something else that’s different is the need to secure the classroom, both in terms of internet use and the physical safety of the students.

Sanders and Brooks are Chambers County natives, and both are pleased to work in a technology-related area for the local school system.

Sanders has been with Chambers County since 2009.

“We had a lot of money for computers at the start,” he said. “We had $100,000 that first year, but it quickly fell off. The E-Rate program has helped us. The federal government matches the money for us. It really helps with the big items.”

One of those big items was to upgrade the switches throughout the system. That’s a complex, and expensive, thing to do. The local system put up $280,ooo and the federal government matched that. School systems that don’t make these upgrades quickly fall behind other school systems that do.

Ten years ago, the system had a ratio of four computers to every student. That has improved over the last decade, and it’s just about down to one to one.

“We buy computers every year,” Sanders said. “Every classroom has four or five of them. In 2014, we started purchasing Chromebooks. We have slowly built our Chromebook inventory and are really big into them now. Teachers are rolling carts of them into their classrooms.”

Club member Greg Duffey said it was hard to get his head around what’s taking place in today’s classroom. He said that when he was at Valley High he had an English teacher named Joe D. Hall who would take a stick of chalk and write on a blackboard with his left hand and then finish with his right on the opposite side of the board.

The blackboard is long gone from the classroom. The phase-out started with projectors, which have been replaced by Smartboards.

“They are great,” Brooks said. “You don’t need a mouse to operate them. They are great for student interaction. We have Smartboards in just about every classroom now.”

The next generation tool is the interactive TV.

Sanders said it’s like having a big smartphone on the wall.

“It has an android operating system built into it,” he said. “It’s much easier to hear than the old system.”

Chromebooks cost about the same as a textbook – around $200 each.

Books cost a lot more than they used to, and computers are costing less.

“We will need 1,600 more Chromebooks to get to our 1:1 ratio,” Brooks said. “We have replaced all our hard-wired desktop machines. Technology becomes obsolete so fast now.”

The school system has firewalls and content filters in its system to keep inappropriate content from being seen by the students. The kids have become tech-savvy, though, and it’s a running battle to stay ahead of them.

“Some kids try all day long to get around what they don’t need to see,” said Club Member Dr. Kelli Hodge, the Chambers County superintendent. “There’s a fine line involved. Sometimes the safeguards can keep us from getting to things we need to get to. We try to have security measures at the schools so people won’t be uncomfortable when they visit.”

The classrooms are locked all day, and there’s a buzzer system at the front door. Visitors have to press a button to be allowed inside the hallways. There’s a new Raptor system where adults have to show their driver’s license upon entry. If the individual entering has a history of being a sex predator, the local police are contacted and can be there in minutes.

According to state law, sex offenders have to self-report if they go to a school for any reason. If they are there and haven’t reported it in advance, they will be arrested.

“On our smartphones, we can see in real-time what’s going on in every hallway and in every room in every school in our system,” said Dr. Hodge.

Shannon Frailey, a Chambers County deputy who was a guest of the club, said he had seen the capabilities of this system during an actual alert. He was with Loon Davidson, an officer who works at the schools and saw what he could with his phone.

“He could immediately see what was going on everywhere,” he said. “He could see every room and every hallway.”

“You can pull up every classroom in every school,” Hodge said. “You can zoom in and get remarkable detail. It records everything. We can go back and pull up what has happened if we need to.”

“We need more guys like Loon Davidson and Brian Yates in our schools,” Frailey said. “The more eyes we have the better.”

Duffey asked Hodge if bullying was a problem in local schools. She said that it was but that the bigger problem involved mental health, an issue that has been neglected in Alabama for some time now.

“Thankfully, the legislature is looking at some of this now,” she said. “Some of our kids have had traumatic experiences in their lives. Some can handle it, while others don’t have the emotional stability to do it.”

Frailey said it had been his experience in law enforcement that those who cause problems aren’t the ones who are most expressive.

“It’s not the loudmouths who cause problems,” he said. “It’s the quiet ones.”

Hodge said that school officials identify students who are at risk for a variety of reasons. “Some have problems at home, and some are close to failing,” she said. “Vaping is also a problem. It’s showing up on video during school hours. We have a Share 911 program. We can read alerts if we think a fight can break out at school. Sometimes kids will go at it on Facebook and then try to settle it at school.”

Chambers boys to play for championship

MONTGOMERY — The Chambers Academy boys basketball team prides itself on defense, and after an explosive first quarter, the Rebels... read more