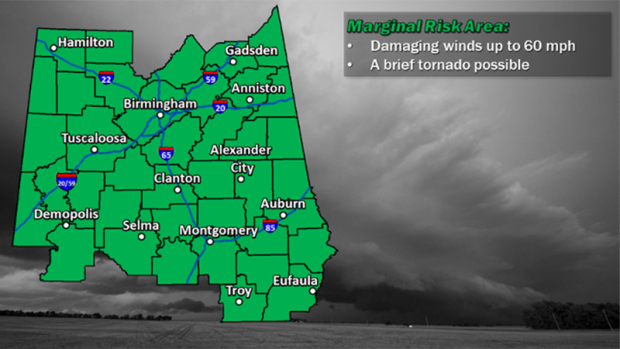 All of Central Alabama is under a marginal risk for severe weather. --National Weather Service in Birmingham

The weather was just about perfect on Monday, with temperatures in the 70s and barely a cloud in the sky.

Unfortunately, it appears that won’t be the case the rest of the week. On Wednesday, strong to severe storms are possible with winds up to 60 miles per hour. Tornadoes are also possible as storms enter the region anywhere between noon and midnight, according to the National Weather Service in Birmingham.

Storms are also expected to linger into Thursday, where there’s a 100 percent chance of rain.

Other parts of the South are also dealing with the same storm system this week, as it makes its way toward Alabama.

The most severe storms on Tuesday could form in Arkansas and Louisiana and western parts of Mississippi and Tennessee, according to the national Storm Prediction Center. Texas, Oklahoma and Alabama will also have some risk of severe weather on Tuesday, forecasters said.

The threat of powerful storms will shift to the Gulf Coast on Wednesday, when dangerous weather will be possible over southeast Louisiana, southern Mississippi, south Alabama and the Florida Panhandle, the Storm Prediction Center is projecting. Georgia, South Carolina and Tennessee could also see some stormy weather on Wednesday.

Heavy rains are expected from the slow-moving system. Rainfall amounts of up to 3 inches will be possible in northern Alabama, according to the National Weather Service in Huntsville.

Volunteers and participants going through the 12-week course of Circles of Troup County had the opportunity to listen to Troup... read more