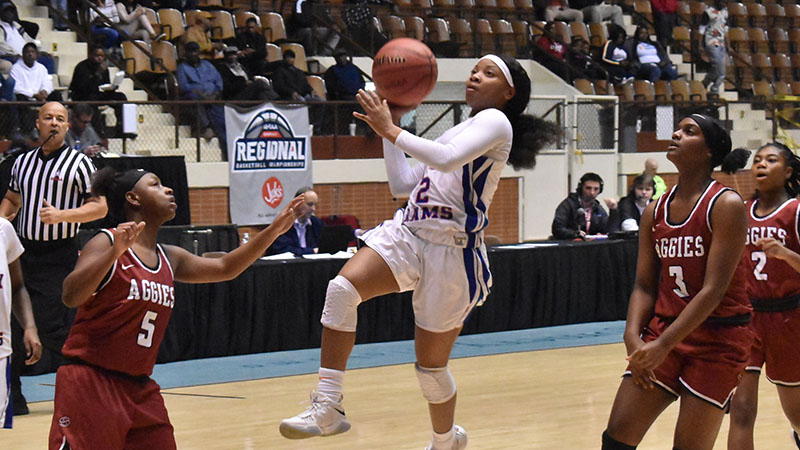 The Valley girls basketball team reached the regional round of the playoffs for the first time since the 2014-15 season, but just as they did in that year, the Rams failed to move to the regional championship. They lost to Sylacauga 41-34 on Saturday, but they had chances to close the gap late in the fourth quarter.

“I just think it wasn’t our night. We just couldn’t make a basket,” Valley head coach George Grimes said. We had some decent looks, but when they aren’t, it’s hard to get into your defense. It just happens.”

The Rams started the game slow, as they missed their first seven shots from the floor. The first made shot came with 3:22 left in the quarter, but by that point, Sylacauga had already built a seven-point lead. The Rams’ deficit reached nine with 2:30 left in the quarter. The Aggies led 11-5 at the end of the eight-minute quarter.

The Aggies scored only eight points in the third quarter, but they held Valley to just two points.

The Rams entered the fourth down 11, but for the first time in the game, they started to hit shots in spurts around the five-minute mark.

They slowly started cutting the lead down. Once the lead would get slashed to a manageable situation (four or five points) the Aggies would spark their offense.

With 1:15 left in the game, Valley cut the deficit down to five for the last time. Without much time to play, it started to foul, which built the lead back up.

Defensively, the Rams were able to force turnovers the entire game. The Aggies finished with 37 turnovers in the 32-minute game, with nearly 20 coming in the first half.

“Our defense does what it’s supposed to,” Grimes said.

The only problem was the Rams couldn’t consistently convert the turnovers into points. They finished with 19 points off the 37 turnovers.

Since starting the playoffs, the Rams have struggled shooting free throws, and Saturday’s loss wasn’t any different. They made just four of their 14 attempts from the charity stripe.

“Free throws, Lord have mercy,” Grimes said. “Sylacauga did an excellent job making theirs and we didn’t. It’s a simple fact of life. We have to be a better free-throw shooting team next year to be playing at this point in the year.”

The Aggies finished 19-of-31 from the free-throw line.

With the loss, the Rams finish the season 18-9.