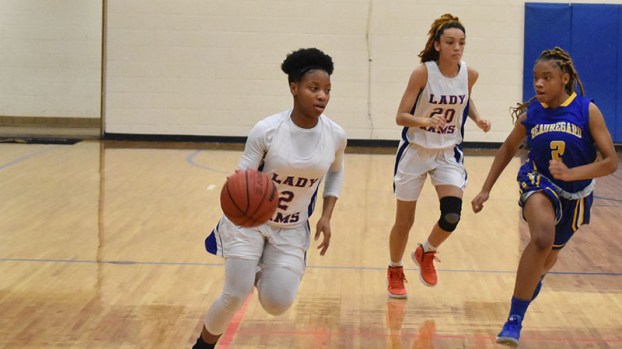 Valley freshman guard Jayla Lancaster drives to the rim in the Rams’ win on Tuesday.-- Photo by Cody Estremera

Survive and advance was the motto of the 1983 North Carolina State men’s basketball team, and the Valley girls basketball team followed that motto on Tuesday in their 67-64 win against Beauregard.

The win advances the Rams to the first round of the state playoffs, which starts next week.

“Heck of a job by Beauregard,” Valley head coach George Grimes said. “I told the girls anytime we play them, it is going to be a hectic, frantic game and that’s exactly what we got.”

The Rams started the game off fast, as they rattled off seven points in the first minute and 14 seconds of the game. This forced the Hornets to take a timeout. Everything changed after the 30-second timeout.

Valley’s lead disappeared by the four-minute mark of the quarter. In the next 2:46 of the first quarter, the Hornets went on a 12-3 run, while the Rams started to get into foul trouble. By the time of the timeout, Valley had just one foul. At the halfway point of the first quarter, it had seven fouls.

By the end of the quarter, the Rams trailed 17-13. The quarter finished with a total of 20 fouls in the eight-minute quarter.

Two Ram starters were in foul trouble for most of the game, which made Grimes go to his bench early and often throughout the quarter.

“Good thing we got them,” Grimes said. “That’s part of the ball game. There’s going to be nights where people are going to get in foul trouble, and others have to step up. We had some folks step up: Darcee Wright, Jasmine Frazier Valencia Bennett, Anaiya Hatchett. I mean even our eighth-grader Lizzy McManus had to come in and give us some minutes early in the first half.”

The Hornets outscored the Rams 16-14 in the second quarter, as the Rams were still struggling to keep out of foul trouble.

Coming out of the halftime break, Grimes was able to fully play his starting lineup for the first time since the first quarter. This allowed the Rams to get going offensively, as they started the third quarter on a 6-0 run tying the game at 33. From the 6:40 mark of the third quarter, the game was a fight.

“We just came out to play [in the second half],” Grimes said. “We just started to put the ball in the basket and started to play a little better defense.”

Neither team took much of an edge in the quarter, but Beauregard led by three starting the final quarter of play.

The score remained close throughout the quarter, as both teams were able to answer the other. Valley took its first lead of the second half with about 2:30 left in the game. The lead switched back and forth for the next 1:15, but the Rams were able to take the final lead at the free-throw line.

The Rams will host the 5A area 4 final on Thursday. They will play Brewbaker Tech at 6:30 p.m. EST.

The Lanett boys basketball team defeated Wadley 80-30 in the first game of the 1A area 6 tournament.  “Its the... read more