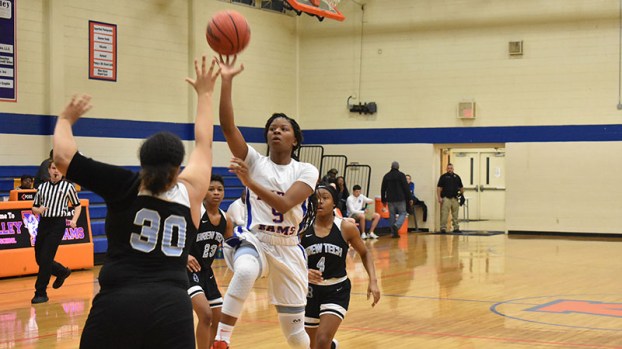 Valley senior forward Arteria Florence floats a shot above a Brewbaker Tech defender in the Rams 5A Area 4 Championship win on Monday.--Photo by Cody Estremera

Just like it did on Tuesday in its come from behind victory against Beauregard, the Valley girls basketball team jumped out to a quick six-point lead to start the 5A area 4 championship game against Brewbaker Tech. Unlike Tuesday, Valley was able to continue its hot start after a timeout, leading to a 57-44 win on Thursday.

“They earned it,” Valley head coach George Grimes said. “I’m proud of what they’ve done. It’s been a couple of years since we’ve won the area, so we’ll take it.”

Valley was able to get into a rhythm early, as they were able to score in transition. This allowed it to set up its press, which forced more turnovers. At the end of the first quarter, Valley had a four-point lead. That lead grew by halftime, as Valley doubled Brewbaker Tech’s second quarter point-scoring total 16-8.

“I saw a lot of determination,” Grimes said. “They had an excellent first half.”

Brewbaker didn’t go away easily though, as it was able to cut the Valley lead down to just six late in the third quarter, which stayed around eight until midway through the fourth quarter. Valley was able to force several late turnovers, which transitioned into easy scores to put Brewbaker away.

Valley was led by seniors Anteria Florence and Ana Magby in scoring. The pair of seniors finished with 31 of the team’s 57 points, scoring 16 and 15 respectively.

Center Anijah Patrick finished with nine points. The sophomore was a big difference maker throughout the course of the game. She was able to score when she had an opportunity and was able to step up on defense, as she was able to block multiple shots and poke a couple of dribbles away from the Brewbaker Tech ball handlers.

Valley will host Greenville on Monday, Feb. 10 at 8 p.m in the first round of the state tournament.

In front of his teammates, his senior class, family and friends, LaFayette defensive back Jordan Walker signed his letter of... read more