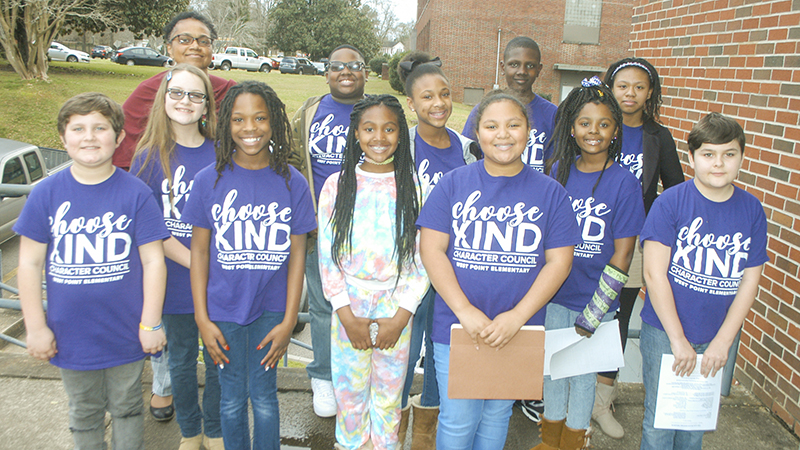 Following remarks by guest speaker Kimberly DeBrow, the entertainment and recognition portions of the program began. The Lynch/Lewis family sang the John Legend song “Glory,” featured in the 2014 movie “Selma.” The children sang while holding signs that read “Peace,” “Equal Rights” and “Vote 2020.” The performance was well received by the large crowd on hand inside the gym.

Troup High Family and Consumer Science teacher Connie Aplin commended one of her ninth-grade students, Gabrielle Peay, on having won a statewide award this year. Peay said she had no idea how much the Troup High FCCLA Club would help her when she joined it.

“It helped me in so many ways, especially in public speaking,” she said. “Being in the club opened my eyes to the fact there are people out there who are less fortunate than me. I am so glad I am in this club and want to remain in it throughout high school.”

Dylan Moore, the first-year house parent of Springwood School’s International House, told the crowd that he and his wife had had an “amazing, beautiful and wonderful experience” in guiding the lives of 21 students in the program. He said that he’d been in constant communication with their parents and introduced a Korean student named Kyle.

“He loves to eat Korean barbecue,” Moore said, “and is into jiu jitsu.”

Four-year-old B’Mora Moss of the Innovation Station Early Learning Center stole everyone’s heart away by reciting a poem about what she’s been learning.

Chief Donald Britt of the West Point Police Department introduced Britney Lovelace, who read passages from “First Grade Blues,” a children’s book she has written about the first week in first grade. It’s a fun look at how many of them are missing kindergarten while they get adjusted to a new teacher and have lots of new things to learn. Lovelace attended West Point Elementary School in her youth.

Chattahoochee Early Learning Academy (CELA) Director Heather Hoats introduced three-year-old students Sophia and Alani and then invited everyone to an open house at CELA, to be held between 6:30 and 8 p.m. EST on Thursday, March 5.

“We have a website and a Facebook page,” she said. “Please reach out to us if you have any questions.”

Members of the West Point City Council presented plaques to young professionals in the city who are doing good work in the community. Council Member Deedee Williams presented a plaque to Amanda James. She commended her for starting a free pantry and lending library in West Point.

“We now have six locations in the city,” Williams said. “Amanda and her husband Michael maintain it along with volunteers who help them. Amanda moved here 10 years ago to work at Kia. That’s where she met Michael. They now have four children and a grandchild.”

Council Member Gloria Marshall recognized Kevin Patrick with a plaque. Patrick is vice president of Premier American Financial Services and is active on several boards in the city such as the development authority. Patrick was joined by his wife, Ranisha, in accepting the award.

“Behind every successful man, there’s a good woman by his side,” Marshall said.