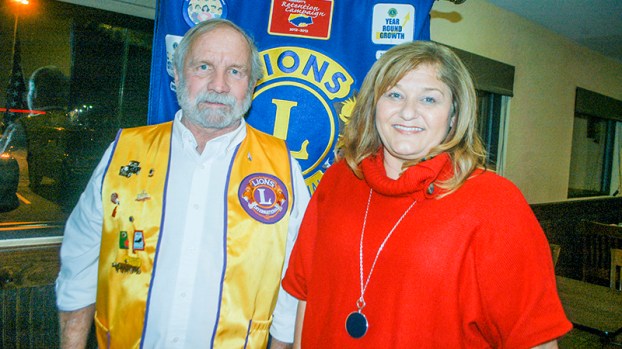 District 38 State Representative Debbie Wood (at right) was the guest speaker at Monday evening’s meeting of the Valley Lions Club. At left is Phillip Sparks, the club president. --Wayne Clark

VALLEY — State Rep. Debbie Wood told members of the Valley Lions Club Monday that she is expecting a very intense legislative session in 2020. She said that 2019 was pretty tough, and this year’s session could be even tougher.

The most discussed topics last year were an abortion bill and the state’s first gasoline tax increase since the early 1990s. The legislature this year will have to take some major action on prisons and there could be new legislation in regard to gambling, possibly with a lottery and less requirements for casinos.

Wood said that Alabama has a very capable leader in Gov. Kay Ivey.

“She’s one of the strongest people I’ve ever been around,” she said. “She’s tough, and no one should underestimate her.”

Raising taxes is never a popular move but necessary if your state is to keep up with surrounding states.

“Everyone who buys gas pays the same tax,” she said. “It doesn’t matter if you are an illegal alien or someone passing through the state, or someone who has lived here all your life, you pay the same tax.”

Wood said that she was tired of homeowners bearing an unfair burden. By contrast, there are large tracts of timberland owned by out-of-state companies that are taxed at pennies per acre.

The new gas tax should do much to improve the state’s roads and bridges in the coming years.

Perhaps the most pressing problem to be tackled by the legislature this year involves prisons. Like raising gas taxes, it’s not popular, but the state has to do something this year. This is the final year the state can act on its own before the federal government steps in, tells the state what it has to do and lets Alabama figure out how to pay for it.

“It will cost a lot more if the federal government tells you to do it,” Wood said.

Wood said she jokes with Chambers County Sheriff Sid Lockhart that he’s got it made with his jail compared to what’s going on at the state level. The county jail does have cameras (state prisons don’t), and it has a much better guard-per-inmate ratio than the state has.

Wood said it had been a sobering experience for her to take a tour of Kilby Prison in the past year. It’s located in Elmore County and currently rated at 106 percent overcrowded.

“There are no cameras and only two guards,” she said. “That’s two guards for 140 prisoners. I had never seen anything like it. Who wants to work for the state prison system? Not many.”

The oldest prison in the state has the fastest growing inmate population. That would be the Tutwiler prison for women.

Wood noted that some new pods are going in at the Chambers County Jail. They are for women prisoners and non-violent offenders.

“Thirty years ago, Bobby (her husband) and I went to Kilby Prison to minister to the inmates,” Wood said. “I will never forget that smell as we were walking through, but they did have a beautiful chapel with a stage and musical instruments. I wonder if they move to a new prison will they still have a chapel? A lot of people are afraid they might lose it.”

Wood said that Alabama had been smart in taxing Amazon. It was the first state in the U.S. to do so.

They found it to their advantage to do so. The state gave them an eight percent rate on everything they sold in Alabama. From that single source, the state gives cities and counties their share.

Had it been broken down with the cities and counties billing Amazon separately, they would have paid much more in sales and use taxes.

Thus far, the Amazon money has been a huge windfall for the state.

“Our revenue is way up,” Wood said. “I never dreamed we were losing that much money that wasn’t taxed.”

Wood said that she was pleased the legislature passed a bill to get broadband into rural areas.

“AT&T showed up at our meetings,” she said. “They didn’t like that companies like TREC (Tallapoosa River Electric Cooperative) would be allowed to do it too.”

“It was a learning experience for many of us,” Wood said, “but it was a consequential year. I think this year will be consequential as well. The following year (2021) everyone will be gearing up for the election the next year.”

There could be legislation this year requiring the Pledge of Allegiance to be recited each morning in the state’s elementary schools. There’s no such law now and many schools don’t do it.

Wood said that she has pre-filed a bill that would permit students with Down Syndrome to be on donor lists, providing their parents approved it. She said that she has parents of such a student living in her district and that they have talked to her about this.

“You shouldn’t keep them off donor lists just because of that,” she said.

Alabama’s new abortion law could be heard by the Supreme Court this year. Wood said that her support of the bill was based on her understanding of the legal principle known as guardian ad litem, meaning that law has precedence over actions that could take place due to the irresponsible actions of a parent.

“The way I look at it, we can be guardian ad litem for that child,” she said.

LANETT — Cecil Ramsey has been doing roofing work in the local area for more than 60 years. His dad,... read more