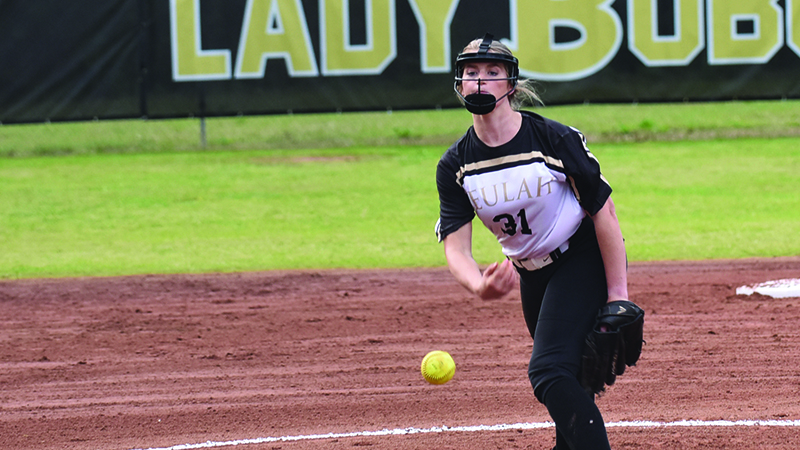 Beulah sophomore Katie Morris throws a pitch in against Dadeville in 2019.--File photo

The Beulah softball team is coming off a season where it reached the went three games into the East Central region of the 3A playoffs last year before they lost to Pike Road. The Bobcats finished 22-8 in 2019 with a team that had only four seniors on the roster.

Through eight games this year, the Bobcats are 4-4, but they have played a gauntlet of a schedule. They opened the season with the Sidney Cooper Invitational, which had teams from across the state and different classifications playing in it. Beulah was the smallest school in the invitational.

In the three games the Bobcats played, they faced 7A Sparkman, 5A Tallassee and 5A Russellville.

Outside of the season-opening tournament, the Bobcats are 4-1 with a pair of sweeps against Valley and Opelika.

“They understand the challenges that we’ve faced, and it doesn’t faze them,” head coach Stan Pepper said. “We’ve purposely scheduled harder teams this year, so when we get into Oxford, we’re prepared to challenge for them to go deep into the playoffs. I’ve been really surprised how well we’ve played against those teams. Our girls are more concerned about ourselves instead of who we’re playing.”

Just as they were a year ago, the Bobcats are a young team, as they start a pair of eighth-graders. Eight of the 12 players on the roster are sophomores or younger.

This makes the four seniors on the team extremely important for Peper and his staff. Madison Bryant is the team’s leadoff hitter and has an on-base% close to .750. Sydney Knight is a utility player that can play multiple positions. Camryn Harris is the team’s slugger, who leads the team with three home runs.

“I’m really proud of them,” Pepper said. “They’ve done a really good job of leading the team, not only on the field but off the field as well.”

The Bobcats’ young core is extremely strong, and they showed off in their 14-9 win against Opelika on Tuesday.

In the circle, the Bobcats are led by sophomore Katie Morris and Philips.

Morris has started most of the team’s games.

“She hasn’t hit her mid-season strike by any account,” Pepper said. “When she’s on, we’re really solid.”

Phillips has come in relief for a couple of games and started once.