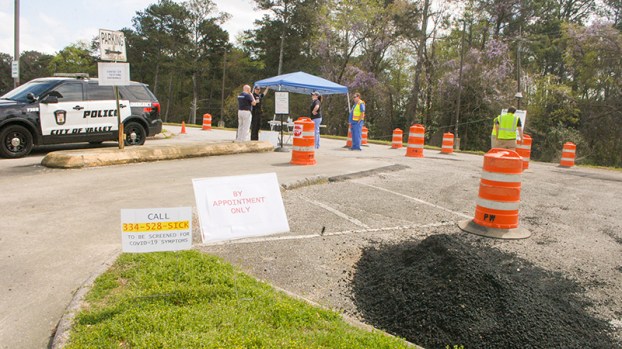 The testing area for EAMC-Lanier is shown. Drive-thru testing started at the hospital on Friday. --Wayne Clark

VALLEY — Testing for the coronavirus began Friday at EAMC-Lanier Hospital. It’s a safe procedure, the person being tested doesn’t have to leave the comfort of their car, and it only takes a few minutes to do it.

It’s by appointment only, and anyone who would like to be tested should call (334) 528-SICK. Each caller will be asked some questions, and if you need to be tested, an appointment will be set up at EAMC-Lanier.

Each patient is asked to write their name and the time of their appointment in large letters on a sheet of paper.

The testing area is at the top of the hill on 48th Street. It’s located in a parking area to the right of the hospital building. It’s easily recognizable as a large white tent with a smaller blue tent located next to it.

When drivers turn into the testing area, they are asked to keep their car window rolled up and show the person meeting you the paper with your name and appointment time on it. If it matches what they have, they will be directed to drive to the large white tent where you will be tested. Just follow the orange and white barrels.

The hospital personnel who are testing are protected with masks and gowns. Drivers will be asked to roll down your window, and a trained EAMC-Lanier professional will swab their nasal passages to complete the testing.

The swab will then be sealed in a small, airtight container and sent to a central location in the state and then to a lab where it can be tested.

Each person tested will be notified of the results in a short period of time.

The hospital’s drive-through center is modeled after what has been tried with great success in South Korea. This technique has been widely hailed as some of the fastest, most-extensive testing anywhere in the world.

Testing is paramount in the treatment COVID-19. The earlier the virus can be detected the better. Some individuals who have it do not have major symptoms for days and can be unknowingly passing it on to others.

Linda Lynd, emergency room director for EAMC-Lanier, was at the testing site on Friday.

“The personnel we have here are from all departments of EAMC-Lanier,” she said. “It’s a collaborative effort to get this needed testing done. We are assigning people to do specific jobs, and some people are in training. We don’t know how long we will be doing this, and we want to have enough trained people to keep it going. Today is our first day of doing this, and we are working through the process.”

Everything was falling into place for Ryan Bliss. Bliss, a sophomore from Troup High, was in the midst of a... read more