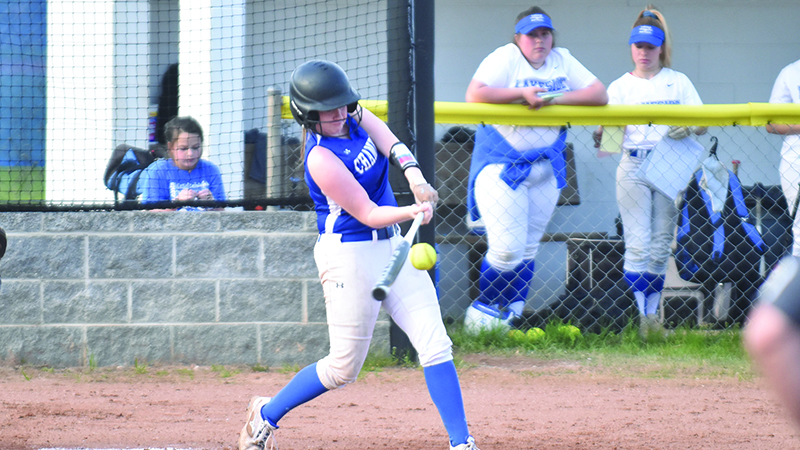 Chambers Academy right fielder Natalie Lovelace drills a double to the left-center gap in the Rebels’ 7-2 win against Lakeside. She also scored a run in the win.--Photo by Cody Estremera

The Chambers Academy softball team was in a battle for the first four innings game against Lakeside on Thursday, but it was able to break the game open in the sixth inning, leading to a 7-2 win.

“I was really proud of the way we bunted the ball,” Chambers Academy head coach Jon Owens said. “We took some better approaches in the later innings. They were giving us fits with the change-up, and we made some adjustments. Then our short game worked for us and put some pressure on their defense.”

The Rebels struck first in the bottom of the first inning. With one out, sophomore right fielder Natalie Lovelace drilled a double to left-center field that hit the fence on one bounce. She scored a few pitches later when catcher Megan Ware doubled to right.

The Chiefs answered in the ensuing inning. With two outs, the Chiefs’ second baseman reached on a double. She scored one batter later when their catcher singled to right field.

Chambers Academy broke the tie in the bottom of the fourth inning. With two outs, shortstop Bailey Allen reached on a single. She stole second and scored on a Chloe Mitchum double.

The Rebels tacked on their third run of the game in the bottom of the fifth. Sophomore second baseman Maddie Reese led off the inning with a walk. She advanced to second on a sacrifice bunt by left fielder K.K. Chambers. A wild pitch moved Reese to third base. She scored when Ware hit her second double of the game.

“We struggled early in the week at the plate, and we just took better approaches at the plate, just being a little short with our swings.”

The Rebels broke the game open in the bottom of the sixth. Leading by a run, third baseman Lindsey Fuller led the inning off with a single. She scored all the way from first on a throwing error by the Chiefs on a swinging bunt by Allen. The error allowed Allen to reach second. She advanced to third on a single by Mitchum and scored on a wild pitch, which also allowed Mitchum to advance to second. Mitchum scored when Chambers hit a double, which rolled past the Chiefs’ left fielder and allowed Chambers to score the final run of the game.

In the circle, Owens went to McKayla Foster, who finished with her first varsity win. Foster went all seven innings, allowing just two runs off five hits and struck out five Chiefs.

The Rebels travel to Heritage Christian for a doubleheader on Saturday.