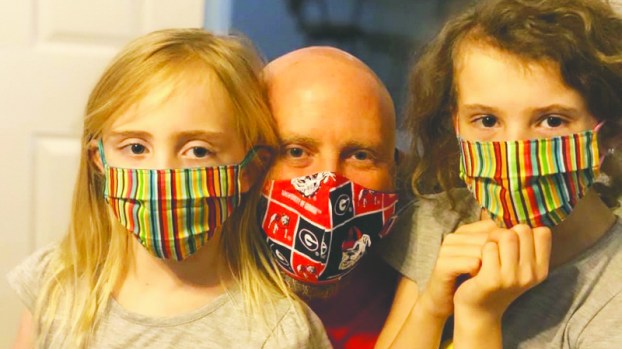 One night after talking to her daughter, Hope, who works in the operating room at East Alabama Medical Center, Cathy Crosson was having trouble getting to sleep. She had heard about the shortages of masks that hospitals were facing, and in their conversation, Hope had told her EAMC was also facing this problem.

The next morning, Cathy broke out her sewing machine and started to make masks for her daughter. She watched a video on Facebook from Deaconess Hospital, a hospital in Indiana, to learn how to properly make the masks. She made the first batch for her daughter, who took them into work.

Hope started to receive requests for more masks from people at the hospital, so Cathy told a couple of her friends about her project and they joined.

Overall the group has made more than 500 masks since March 20.

“We all banded together and shared supplies to make sure everybody had what they needed to get going,” Amy Nolen said.

Both Nolen and Crosson already had enough supplies to make the masks since they had been making outfits for their families, Crosson for her granddaughters and Nolen for her daughters.

Since they were making items for baby girls, both Crosson and Nolen wanted to get some fabric that is more masculine for the men to wear.

Since homemade masks aren’t approved by the Center for Disease Control, the masks aren’t used as the mandatory mask, but the staff at EAMC is wearing the masks on top of the approved masks.

“These masks are for desperate times that if there were no masks, this would be better than nothing,” Crosson said. “It’s also kind of just bring a little joy to have something fun because all of the masks have different things on them. It’s bringing a little joy to people.”

The masks have ranged from polka dot to Disney and both Georgia and Auburn in designs.

“Auburn has been very popular, which I don’t like very much because I’m an Alabama fan, but it’s for the good of the country, so I just bear with it and do it,” Crosson said.

Making the masks doesn’t take a ton of time. Nolen splits up the masks so she can make them in bulk easier. This way it takes about five to 10 minutes to make a mask. Her husband, Scott, and their two daughters have helped in the production, as they have cut fabric and elastic and pinned fabric together to speed up Nolen’s process.

For the most part, the masks have primarily stayed in Chambers County, but Crosson has sent them to other places, like Huntsville, Columbus and even up to places in Pennsylvania.

When the masks are sent out of the county, the group sends them through the mail. After making a mask, Crosson washes it with hot water and Hydrogen Peroxide. After they’re dry, the masks are packaged individually by Crosson, who is wearing a mask and gloves to make sure they are clean.

Nolen has been delivering her masks to different hospitals. For example, she delivered 40 masks to EAMC Lanier on Tuesday.

“We’re just sewing as fast as we can and delivering to people that are asking for them,” Nolen said.

The best way to reach out to any of the three women is through Facebook, whether that is to ask for a mask or to try and help out.

Along with this group, the Quilts of Valor and a Facebook group called East Alabama Mask Makers are also making masks for the surrounding area.

LANETT — Several members of Mount Hermon Baptist Church have tested positive for the coronavirus, according to the church’s pastor... read more