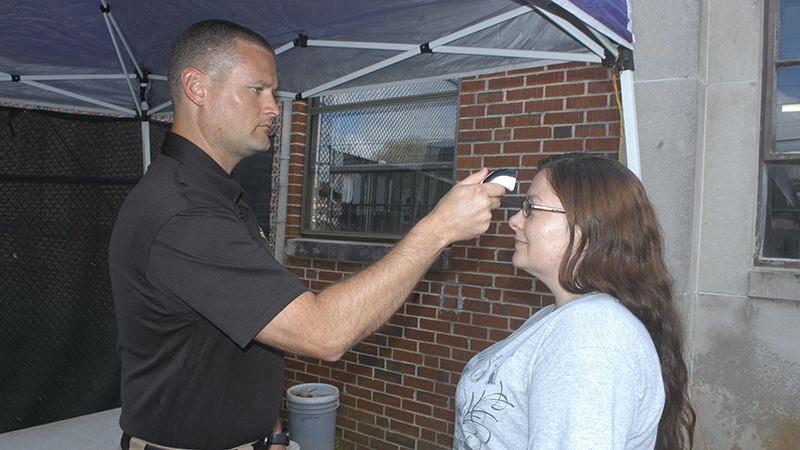 Sgt. Derick Wright (at left) demonstrates how anyone entering the Chambers County Detention Facility is being tested for possible coronavirus. Everyone is scanned by a forehead thermometer. If their temperature is 100 degrees or more they are denied entry and asked to schedule for testing at EAMC-Lanier Hospital. --Wayne Clark

LaFAYETTE — Chambers County Sheriff Sid Lockhart wants everyone to know that his department will continue to fully serve and protect the citizens despite the threat of COVID-19 and the restrictions required.

“We are handling situations the best we can,” said Major T.J. Wood, noting the recommendations being made of social distancing. “We are answering the phone more and dealing with more situations that way.”

There have been no cutbacks on patrols.

“We have at least two deputies on patrol at all hours. Having split shifts allows us to have three or four on patrol,” Wood said. “We will not cut short protecting our citizens and being there for them.”

There are some new procedures in place at the Chambers County detention facility. Anyone coming to the jail is screened for their temperature and asked some basic questions.

“We ask them if they have had a cough, a fever or flu-like symptoms.”

Anyone whose temperature is 100 degrees or more is asked to schedule for testing at EAMC-Lanier Hospital.

Parrish said that the basic hygiene recommendations being made have been in place for a long time at the jail.

“We have always asked everyone to wash their hands a lot and to use sanitizer,” he said. “That’s been standard procedure for a long time.”

The recent dry weather has allowed construction to catch up on the new 120-bed expansion at the jail. It was originally scheduled to be ready by this fall but could be finished as early as May.

It’s a medium security addition, and four people will be hired to help run it.