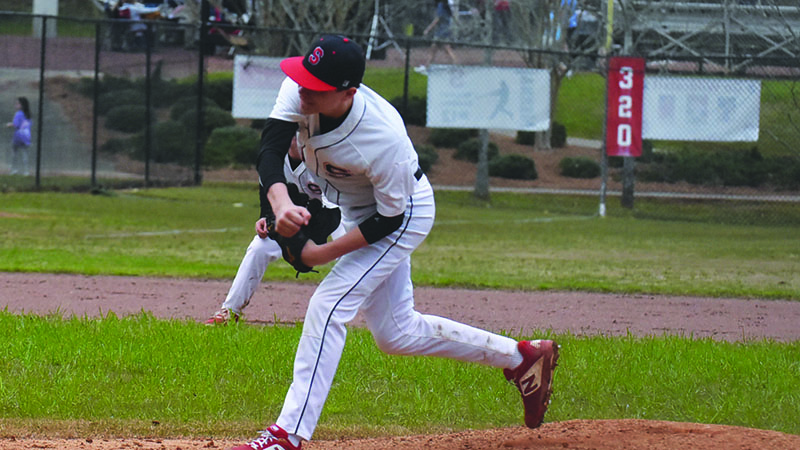 After losing its last four games, the Springwood baseball team dominated its double header against Clay County Christian on Monday, winning 12-0 and 7-1 respectively.

The Wildcats’ played small ball in the first game, which was extremely effective for the entire game.

They started the bottom of the first inning by bunting for a pair of singles, putting two runners on in just two pitches. Senior Elliot Ambrose saw five pitches before he doubled to right field, scoring the first two runs of the game. The third bunt of the inning accounted for the third single of the inning. With runners on the corners, Jordan Plank put down a sacrifice bunt that scored Ambrose from third and advanced Sam Bradfield to third. A balk scored the Wildcats fourth and final run of the inning.

“We put pressure on them to see if they could field the bunt, and at times they showed that they couldn’t,” Springwood head coach David Strickland said. “They were sliding around with it being a little muddy. We were very aggressive on the bases, we did a lot of hit and runs, just trying to put pressure on them.”

In the second, the Wildcats added to their lead by one. After a pair of walks, Ethan Plank stole home to score the lone run in the second inning.

In the third and final inning, the Wildcats exploded scoring seven runs. They started the inning by a hit-by-pitch and after a lineout, added two more runners, one by a single the other by a hit-by-pitch. A double to deep center field by sophomore Cooper Champion scored a pair of runs. A walk reloaded the bases and a hit-by-pitch scored the third run of the inning. A pair of two-out doubles scored two runs each.

Ambrose, Bradfield and Jay Davidson all finished 2-for-2 at the plate. Ambrose had a game-high 4 RBIs.

On the mound, Brafield and Ambrose locked down Clay County. Bradfield threw two innings and struck out five in 31 pitches. Neither pitcher allowed a hit.

The Wildcats struck for a trio of runs in the bottom of the second. After drawing back-to-back walks to lead off the inning, the Wildcats recorded outs on their next two plate appearances. Then Jordan Plank doubled to right field scoring the first run of the inning. After a walk, Ethan Plank followed with a double of his own, scoring a pair of Wildcats.

Clay County scored its only run of the day in the top of the fifth. The first four Eagles reached base as they were able to lead off the inning with a walk while the next three batters each reached on a single.

On the mound, the Wildcats were led by Champion. He threw 4 ⅓ innings, allowing just one run and a hit. He struck out eight batters.

“He had a no-hitter going until the fifth inning,” Strickland said. “I like the way he reacted because he was upset about it,  and I wanted him to be. He said it. He said that’s not acceptable for him, so that tells me a lot about our pitchers. They’re going out there and holding themselves accountable.”

The Wildcats host Glenwood for their first area game of the season on Tuesday. First pitch is scheduled for 4:30 p.m.