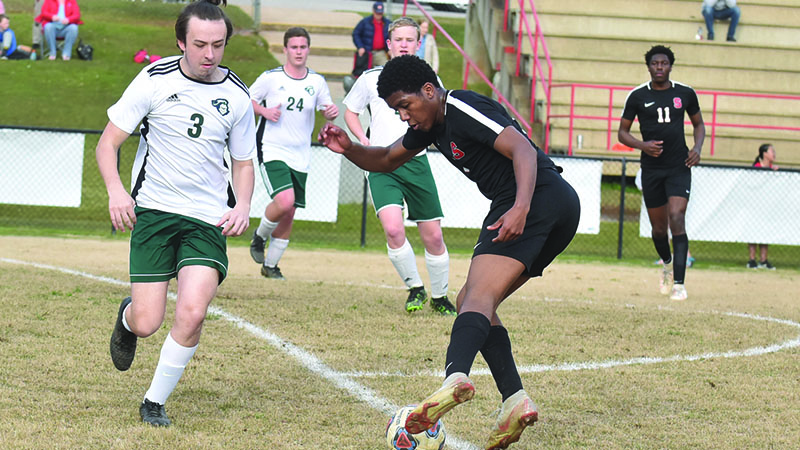 Springwood junior Tyreese Ferguson gains control of the possession in the Wildcats win against Northside Methodist. Ferguson finished with a game-high four goals.--Photo by Cody Estremera

Just as it did it Saturday’s 7-0 win against Northside Methodist, the Springwood boys’ soccer team dominated, winning 10-1 on Tuesday.

“I just liked the intensity we had. We fought for 80 minutes even though we were ahead by a good bit,” Springwood head coach John Lanier said. “We didn’t slow down or change the way we played.”

It took less than 14 minutes for the Wildcats to build a comfortable lead against the Knights, scoring three goals by the 26:27 mark of the first half. They were able to skillfully attack the Knights defense, dribbling through the backline and firing off multiple shots in the box.

They scored their fourth goal of the half just a couple of minutes later when Kelton Messer beat the Knight’s keeper.

Junior Tyrese  Ferguson tacked on the fifth goal of the half when he beat the Knight’s keeper to the ball and snuck it just past him.

Ferguson led all players with four goals. Sophomore Connor Barber and seniors Francis Okeyia and Jonah Kelley each found the back as well in the win.

For most of the game, the Wildcats were able to keep possession and stay on the Knights’ side of the field, forcing the defense to play at their pace.

“They fought for the balls and fought for possession,” Lanier said. “They were able to step to attackers. Just the effort they gave, no matter where the ball was, they just continued to fight for it.”

The Knights were able to keep the Wildcats’ main scoring threat, Coleman Hull, off the board, as he finished without a goal. Even though he didn’t add to the scoreboard, the senior captain was able to affect the game in different areas.

“For us to score 10 goals and him not score any, that’s fantastic for us to share that because that means if somebody does take him out of the game, we have other guys that can score,” Lanier said. “They just took his scoring out of the game. He was a huge part of the game with his possession and passing.”

The Wildcats are back in action on Friday.