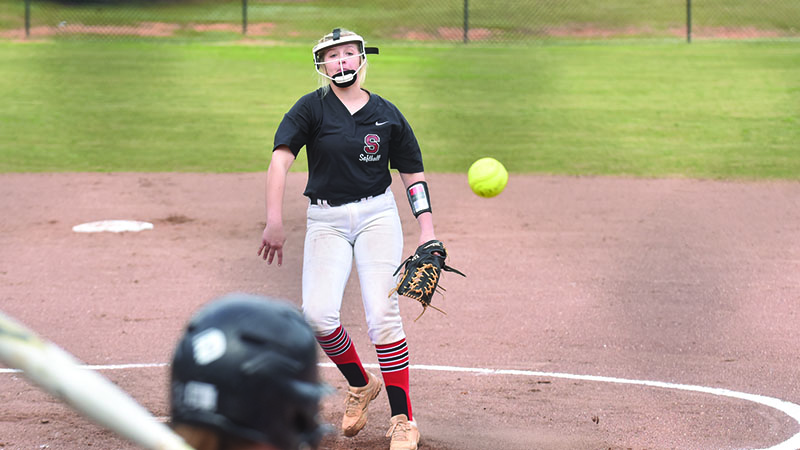 Springwood freshman Alyssa Burrows allowed only one run, which was unearned, in her six innings of work in the Wildcats’ first game of the double header against Autauga Academy.--Photo by Cody Estremera

The Springwood softball team split its doubleheader against Autauga Academy on Monday, 4-3 losing in extra innings in game one, but dominating in the second game, winning 14-7.

In the first game, Autauga Academy struck first. A bloop single put a runner on first to start the game for the Generals. The runner stole second and scored on a Springwood error.

From that point on, neither team could find any offensive consistency, as both teams failed to score until the sixth inning.

After struggling to put the leadoff runner on base all game, Springwood senior Emma Jennings singled to start the bottom of the sixth. After a flyout, Jennings advanced to second on an error and scored one batter later after a single by third baseman Bailey Morrison. The Wildcats had a chance to take the lead in the sixth, as they had the bases loaded, but they weren’t able to get the hit and ran into an out at the plate.

“We just didn’t get the timely hits when we needed them,” Springwood head coach Galen Smith said.

The run in the sixth sent the game into extra innings, where the Generals were able to get their offense rolling. They scored three runs in the top of the eighth off a couple of singles and a walk.

The Wildcats wouldn’t go down easy in the bottom of the frame however.

With a runner on second to start the inning, senior McKayla Barber singled, scoring Jennings from second. Barber scored two batters later when Morrison singled to right field. The game ended on a base running error by the Wildcats when the runner on third was picked off.

“I was upset we didn’t do more offensively but that’s part of the game,” Smith said. “Some days you’re hot and some days you struggle.”

The second game was completely different for the Wildcats. They started the game off by scoring eight runs in the bottom of the first inning. The first Wildcats who failed to reach base in the inning was the eighth spot in the order.

“I just said we’re going to take more chances in the second game,” Smith said. “We stole bases a little bit more and bunted the ball a little better.”

Overall in the first inning, the Wildcats sent 13 batters to the plate.

The Wildcats added to their lead in the second inning as they tacked on a run.

They did most of their remaining damage in the bottom of the fourth inning. They scored six runs in the frame, which allowed them to put the game away for good.