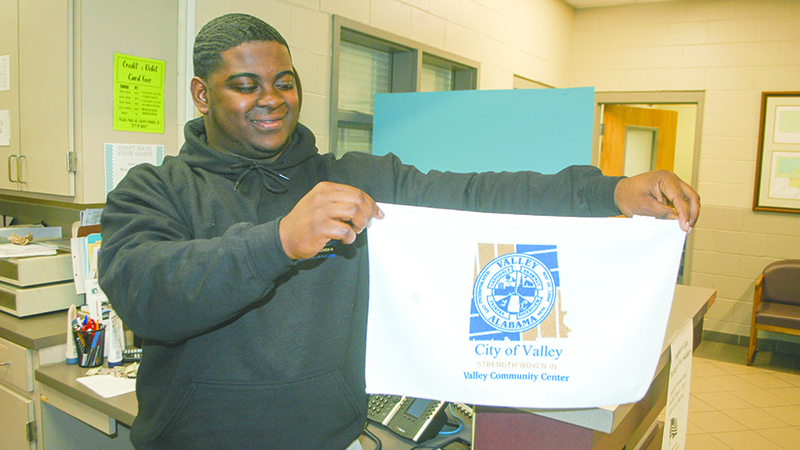 LaGarian Hutchinson displays one of the towels given away at Saturday’s Leap Day celebration at Valley Community Center. It was a free day, and in addition to getting a free towel participants could take part in the exercise programs that were taking place and could try out the newly resurfaced racquetball courts. --Wayne Clark

VALLEY — There was some good participation at Saturday’s Leap Day celebration at Valley Community Center. Feb. 29 falls on the calendar only once every four years, and this year it was on a Saturday.

“It’s a free day, and it’s a fun thing to do,” Valley Parks & Recreation Director Laurie Blount said. “It’s a way to introduce people to the many programs we have going on here. We did this for the first time in 2016, and we’d like to keep doing it every Leap Day.”

It started at 8 a.m. with Julie Ambrose teaching a workout class known as Fix Mix. At 9 a.m., there was a Dance to Fit class taught by Regina Bassett and a DDP yoga class taught by Ben Carson. At 10 a.m., it was time for Boot Camp ought by Lantorrance Rudd and water aerobics taught by Alex Taylor.

A leap day is observed because the Earth’s period of orbital revolution around the Sun takes approximately six hours longer than 365 whole days.

A leap day compensates for this lag, realigning the calendar with the Earth’s position in the Solar System, otherwise, seasons would occur later than intended in the calendar year.

This was happening with the previous, or Julian, calendar which was used until the 16th century. One leap day was added to years divisible by four in the Gregorian calendar, which has been in used since 1582. It is named for Pope Gregory XIII, who introduced it.