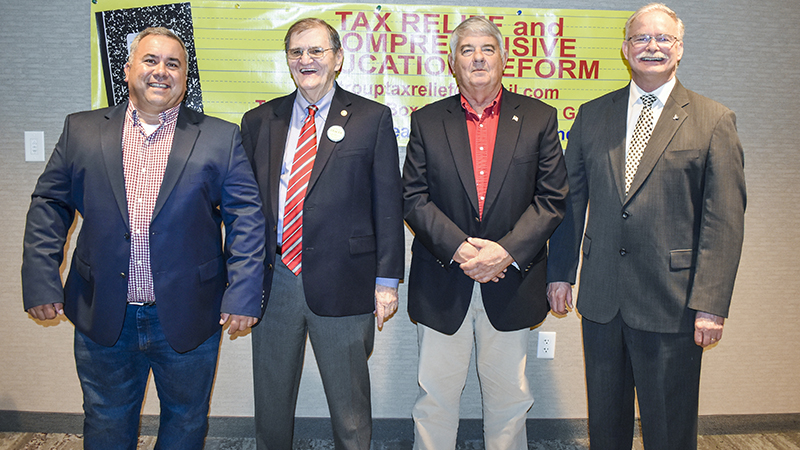 EDITOR’S NOTE: This story has been updated to reflect that qualifying ends at noon on Friday.

Four candidates for the Troup County School System Board of Education formally announced their candidacy Thursday morning at the Courtyard Marriott hotel in downtown LaGrange.

The four candidates are all endorsed by the Tax Relief and Comprehensive Education Reform (TRACER) group, which has been at the forefront of reducing property taxes imposed by the school system.

In District 2, former educator Frank Barnes is running against Ferrell Blair, who is a local rancher. District 2 is currently represented by board chairman Kirk Hancock, who said he is not seeking reelection.

In District 3, Nick Simpson is being put forward by the group. He will run against incumbent Brandon Brooks.

In District 5, the group has put forth Tommy Callaway, who will challenge incumbent Cathy Hunt.

Lastly, in District 6, Tripp Foster, who is a local business owner, will run. As of 5 p.m. on Thursday, incumbent Joe Franklin has not qualified for reelection.

On Thursday, each of the candidates stood before a standing-room-only crowd inside a conference room at the Marriott to share their ideas for the upcoming election.

“The candidates that we support understand these issues and are prepared with solutions,” he said.

Barnes said he’d spent 57 years in education and 38 years as a teacher or a coach. He said there are three “R’s” he plans to hold himself accountable to, but it’s not reading, writing and arithmetic.

The first R stands for being responsive to the needs of teachers and students.

“Their primary need right now is to restore discipline in the classroom,” Barnes said. “Disorderly conduct and disruptions must be removed.”

He said he wants to see the school system remediate the problem, and if not, other means will be found for the students.

“The children will be seeking and replacing an alternative learning environment, and some children will, yes, have to be expelled,” Barnes said.

The second R stands for reasonable policies of personnel and fundamentals in education. He said the school board should use the philosophy of hiring the best-qualified people for the needs of the system. Also, the school system should use new programs as a test subject unless it knows it works.

“I think that just going into this idea about trying out an educational program with our school system is a wrong approach,” Barnes said. “If it won’t work here, let’s don’t try it. Let’s gather data and evidence that’ll help our kids learn or let’s don’t have a policy that will institute something that is subject to fail and only frustrates the teacher and the student.”

The final R stands for a rational approach to budgeting. Barnes said the school system and money it spends belongs to the public.

“We are simply custodians that are supposed to carry out the will and consent of the people,” he said.

Simpson spent his time talking about the perception of overspending within the school system. He said the system had budgeted $12 million more than it has taken in throughout the past five years. He said that money hadn’t improved the education within the system.

“We are desperately trying to flip this board,” Simpson said. “Flipping the board means that we have four board members, and with seven members on the board if we have four, we automatically have a quorum. You would have control from day one.”

Simpson said the group had had enough of wasteful spending, lack of discipline and teachers being intimidated by administration.

Callaway also spent time talking about discipline issues inside the classrooms. He said the disorderly students need to get out of the classroom and that the board should hold the administration and school system responsible for discipline in the school.

He said there weren’t discipline problems when he was in school, and the current issues are affecting student achievement.

Foster had a multiple point platform, which started with him saying the candidates speaking Thursday will do more than show up at a meeting but also do homework behind the scenes.

“We will not just be a sitting board or rubberstamp board but a working board,” he said.

Foster said he wants to support teachers in the classroom by giving them the proper supplies paid for by the district and not by the parents.

He also touched on discipline, saying effective discipline is necessary.

“We need effective discipline policies, and we need to stand behind them and be consistent,” Foster said. “We will do the best we can to make it a more effective discipline environment where teachers can teach and students learn, and the report card will be proof of that.”

He also touched on wanting to provide safer campuses for teachers and students, as well as visitors to the various campuses. He spoke about putting cameras in the classroom, not to monitor the teacher’s work, but to monitor conduct.

Foster then moved on to wasteful spending. He said it takes money to run a school system, but it takes responsible leaders to spend those dollars.

“It’s about being good stewards,” he said. “It’s about working hard and being diligent with your tax dollars.”

Foster said the group worked hard to get some relief for Troup County seniors, but he thinks more can be done.

“I think a better deal can be garnered for the senior taxpayers of this county without hurting or being injurious to the people under 62 years of age,” he said.

The TRACER group will host a candidate forum of its candidates at 5:30 p.m. on March 26 at the East LaGrange Baptist Church Annex. Qualifying for school board seats, as well as all other local offices, ends at noon on Friday. The election will be May 19.