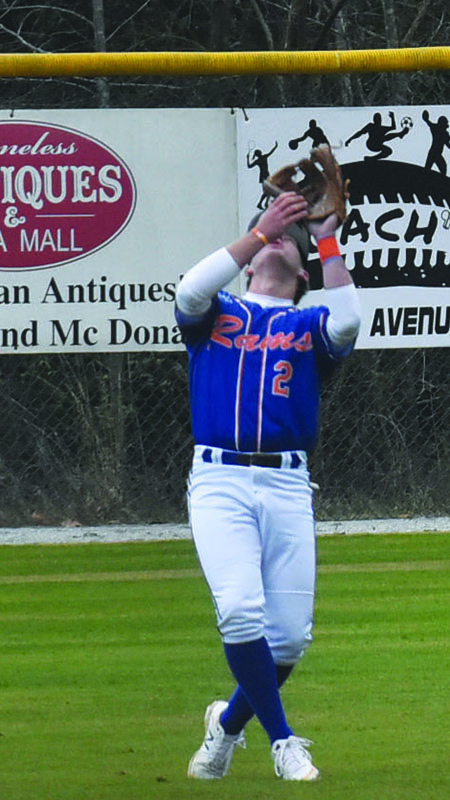 It was the bottom of the order that led the Valley baseball team to victory against Troup County on Monday night, as the Rams defeated the Tigers 6-2.

The last three batters had struggled for the Rams, as they were struggling to just put the ball in play, but they came up with three of the team’s nine hits on Monday.

“We’ve just been stressing to the guys ‘hey you guys have got to come through,’” Valley head coach Patrick Shivers said. “We had a couple of full count scenarios down to the bottom of the order and, and I told them ‘hey, look, it’s full count, you better be willing to hit the ball. If it’s close. Let’s try to put a swing on it.’ They did a good job of doing that, and a couple of them came through with some clutch base hits.”

After the first seven Rams were retired in order, right fielder George Chambley singled on a blooper to right field. After a couple of failed bunt attempts, left fielder CD Clark hit a screaming line drive to left field for a double, putting two Rams in scoring position for the top of the order. A groundball up the middle scored the pair of runners, giving Valley a lead it would never give up.

The score remained 2-0 in favor of the Rams until the bottom of the fifth. With two outs and a runner on first, the Rams were able to draw back-to-back walks to load the bases for Daniel Osborne, who drove in a run off a single to left. A walk and a groundout added two more runs in the inning, putting the Rams up five.

However, Troup battled back in the top of the sixth. The Tigers led the inning off with a walk by Colton Webb. He scored on a two-out error, which allowed Cade Gardner to reach second base. Gardner scored on a single to right field, cutting the Rams’ lead to 5-2.

Clark once again was able to spark the Rams’ offense. He singled to the Tigers’ shortstop and advanced to second on a groundout. With two outs, center fielder Will Kenedy picked up his first hit of the day, singling to left field for the last run of the game.

Overall, the Rams finished with nine hits and four walks, while striking out just four times.

Clark and Culpepper each finished with a pair of hits, while Clark scored a pair of runs.

The Rams were led by eighth-grader Jackson Sanders on the mound. The lefty threw all seven innings in 81 pitches.

“He pitched extremely well,” Shivers said. “He’s got great command of all his pitches. He was able to spot his fastball, and he was able to keep people guessing with his off-speed stuff.”

Sanders retired the first 12 Tigers before an error allowed the first base runner of the game. Troup’s first hit was the 21st batter Sanders faced.

As an eighth grader, Sanders is only allowed to throw 85 pitches in a game. He entered the top of the seventh with 77 pitches, and retired the Tigers in order, throwing just four pitches.

“He does such a good job of getting ahead of guys,” Shivers said. “He does a good job of doing that [pitching to contact] and he’s smart.”

The Rams look to extend their four-game winning streak on Thursday when they travel to Benjamin Russell. First pitch is scheduled for 5 p.m. EST.