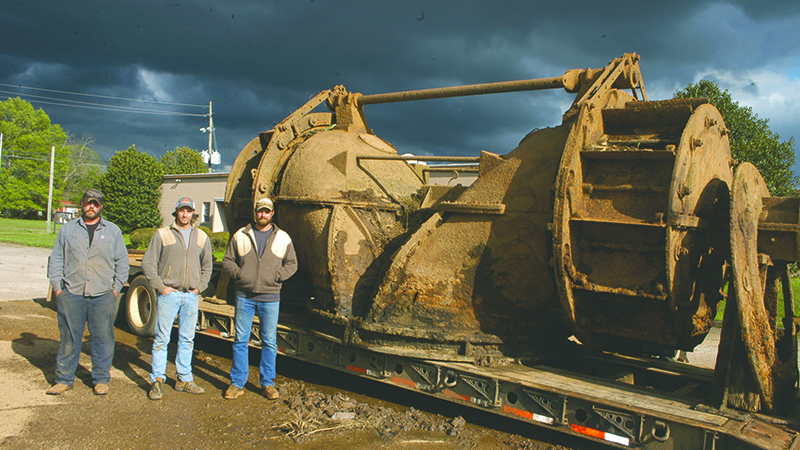 The final pieces of a massive turbine that once powered Riverdale Mill has been moved from its original site and transported to the Henry Hudson Company warehouse off River Road. The first portion was moved to the warehouse several years ago. The turbine was manufactured by the Golden Foundry & Machine Company in Columbus and transported up river by steamboat. What had been in a river channel underneath Riverdale Mill since 1890 was two turbines each weighing 56,000 pounds and a balancing wheel some fifteen-and-a-half feet in diameter. It had to be a marvelous piece of engineering for its day. Shown above, from left, are Barry Fuller and Thomas and John Bush. --Wayne Clark

VALLEY — A 19th-century turbine that once powered Riverdale Mill has been moved from its original site and now rests on a flatbed trailer off River Road. It was recently moved by brothers John and Thomas Bush of the Henry Hudson Company.

The Bush brothers and their work crew had to pull it out of where it had been in the Chattahoochee River for the better part of the last 130 years. It was no easy chore.

“It took over 75,000 pounds of lift pressure to get it out of the mud,” said John Bush. “It was at the outer limits of what our crane can do, but she did it.”

The big turbine had powered Riverdale Mill in the days before electricity was transported by power lines.

The Bush brothers have learned much about this huge piece of equipment and are impressed with the engineering that went into it.

It was manufactured in the early 1880s by the Golden Foundry & Machine Company in Columbus, Georgia. That company opened in 1882 and is still in business, and a fifth-generation member of the Golden family is its current president and CEO. The turbine was installed during some major renovation work at the mill in 1890.

What’s been relocated from the mill site to a warehouse on River Road is not just one big item.

“There were two turbines and two wheels,” said John Bush. “They weren’t connected, and they worked independently. We couldn’t see this at first, but we did when we started moving it. Shafts were in line with a balancing wheel, and one belt could turn it.”

The balancing wheel in and of itself is amazing. It’s some fifteen-and-a-half feet in diameter. The two turbines and two wheels rested on huge longleaf pine timbers. The turbines weigh 56,000 pounds each. It took some doing to place all of that in a channel off the river. As the water flowed over it, everything worked in unison.

For sure, it’s an impressive piece of art.

The first piece of the turbine was removed three years ago and has been in the Henry Hudson Company warehouse since then. The remaining portion had to be removed before the final demolition of Riverdale Mill could commence.

The turbine was no doubt on the cutting edge of technology for its day and was part of something special at Riverdale. The mill was once featured in Robert Ripley’s Believe It or Not for having four ground-level entrances.

“There were four floors,” said Thomas Bush. “Three production floors and a basement.”

River View community resident Homer Harris, who came by to see the big turbine and balancing wheel, said he could remember seeing it when he worked at the mill.

“I returned from Vietnam in 1970 and went to work at Riverdale,” he said. “It hadn’t been used in years, but I could see the turbine when I crawled under the mill on a work assignment.”

Harris was the mill’s air conditioning and refrigeration man and worked for his father-in-law, plant engineer Raymond Smith.

“I helped install the first air conditioning in the mill,” he said. “It wasn’t for the workers. Some of the women complained that it made it too cold. It was done to have the right temperature and humidity for the spinning frames.”

Some true American ingenuity went into that 1890 turbine. It was capable of regulating the flow of the water, giving uniform and consistent output from the power source.

The local mills went to power line electricity following the completion of Langdale Dam in 1908. That same year, Shawmut Mill opened as West Point Manufacturing Company’s first plant located off the river and completely powered by electricity. Riverdale, Langdale and Lanett converted to that use and Fairfax Mill came on line in 1915.

“We are a full-service demolition company, and we process the material we salvage,” John Bush said of Henry Hudson. “We provide high-end products for high-end custom homes.”

He marvels at the quality of heart pine wood they have been finding in the mills.

Getting all pieces of the turbine removed was a chore, and the Bush brothers are glad to be finished with it.

“This has been a long time coming. It’s good to have it out,” said Thomas Bush. “It’s the first step in finalizing River View’s next evolution.”