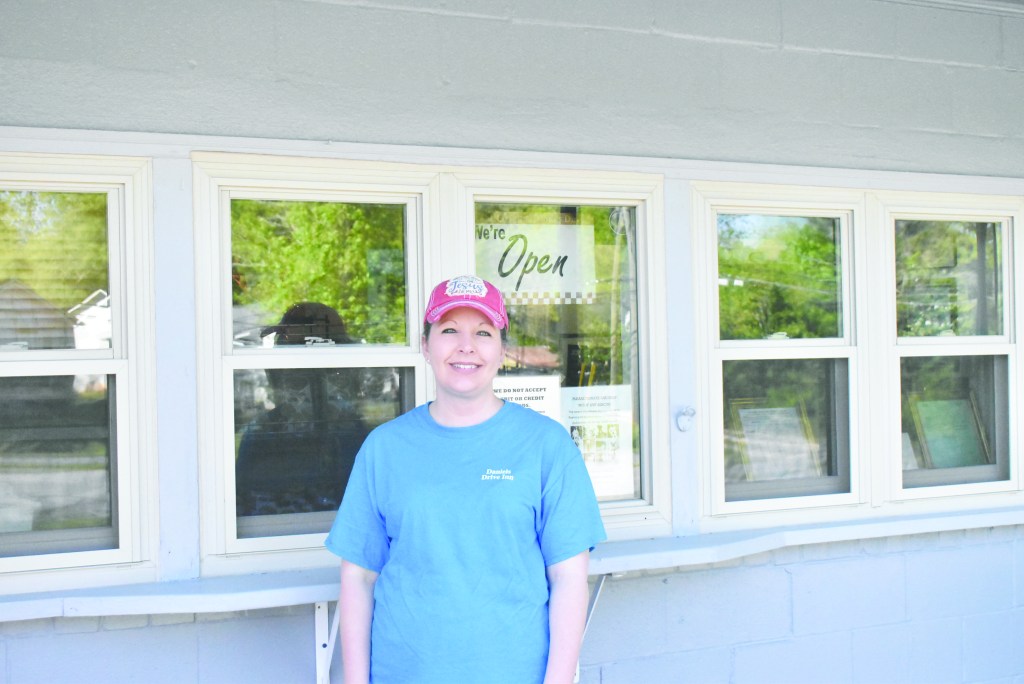 Daniel’s Drive Inn owner Becky Nelson stands in front of the ordering window in her commemorative t-shirt. Daniel’s marked its 70th anniversary this past Saturday.

In April of 1950, Daniel’s Drive Inn opened its doors for the first time. Seventy years and four buildings later, the restaurant is still thriving and serving breakfast and lunch.

“It’s amazing that we’ve made it this many years just being a small family-owned business. Just happy to be here to continue to serve the Valley-Lanett area,” owner Becky Nelson said.

For the most part, the restaurant has remained the same as recipes and most of the workers have remained with the business for years.

The only change has been the change in prices, which happens over time.

Nelson was born into the family business. When she was an infant, her mother, Harriet Wadkins used to keep her at the restaurant.

“They used to keep me in a banana box. It was like a bed,” Nelson said.

After leaving home and working in a couple of different places, Nelson returned to Daniel’s when there was an opening and Wadkins needed help in the early 1990s. After working for her mother for several years, Nelson bought took over the business from her mother in 1999. Wadkins is still part of the business, working mainly at the front window.

Nelson’s favorite part about the restaurant is getting a chance to talk to the customers.

The actual 70th anniversary was on April 18, but the restaurant had been closed since March 30 because of the COVID-19 outbreak.

“We just went through that spell that we didn’t know what to do,” Nelson said. “The only reason that we closed is my mom is 72-years old, and she’s at the window most of the time. Marie [Jones, who has been a worker at the drive-in for more than 30 years] is 65. I was a little more fearful that they would get sick, and I didn’t want anything to happen with them. We were just ready to get back.”

Now that it’s back open, the restaurant plans to stay open.

Daniel’s made shirts before the outbreak started, but for now, that is the only celebration that’s been planned for seven decades in business.