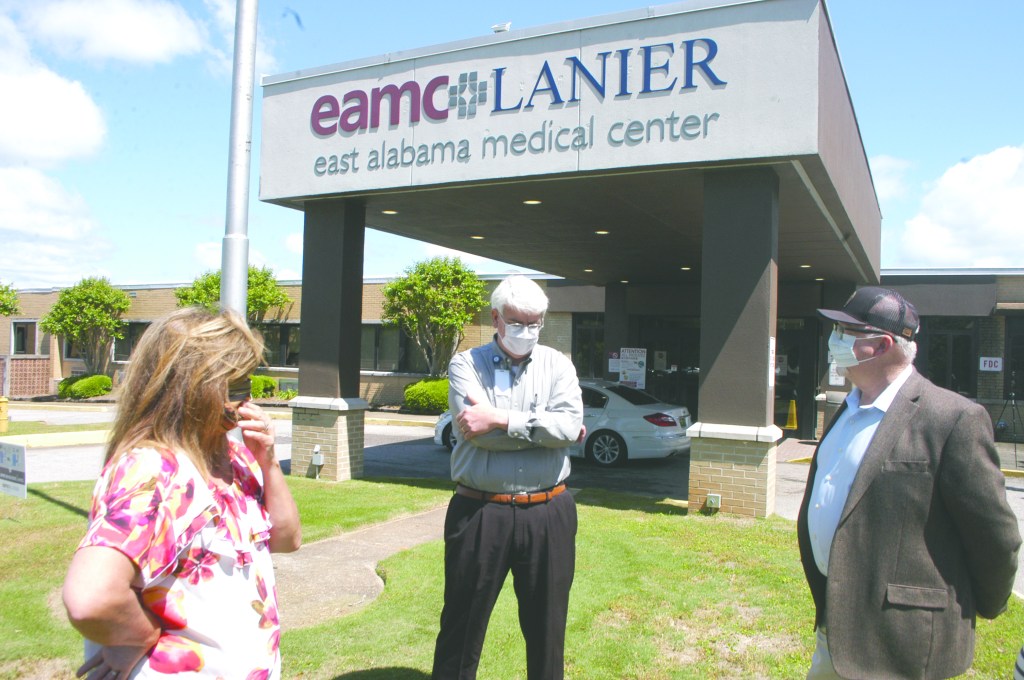 Nichols had some good news for them – both EAMC-Lanier and EAMC in Opelika are seeing a downward trend in terms of overall cases.

“It’s been stable and our numbers are dropping,” he said. “That’s good.”

The hospitals are in good shape with professional protective equipment (PPEs) and ventilators. At one point, EAMC-Lanier sent some of theirs to the Opelika campus, where the more severe COVID-19 cases were being treated.

Price said that he was hoping Congress and the president would be offering help to hospitals in upcoming legislation. When they devoted full priority to treating victims of the pandemic, they cut back on elective procedures and outpatient treatment.

Nichols said it had been an amazing experience to witness the way hospital employees had pulled together to get through a crisis.

“Physical therapists were serving meals,” he said. “Everyone pitched in together to keep going. Our goal was to keep going without having to furlough anyone.”

“We need to be talking to our representatives in Washington about funding for our hospitals and their employees,” Wood said.

Nichols said that hospitals had gotten some help and that the administrators were appreciative of that but that more was needed.

“As a small business owner, I know what both small businesses and hospitals have been going through,” Wood said. “There’s definitely a physical effect from the virus, but there’s also a mental and emotional effect on being shut down. I don’t understand why I am allowed to go to Walmart and buy shoes but not to Cato’s. There needs to be some consistency and some structure in what is being done. Businesses that can open safely should be allowed to do so. I know there is frustration on the part of small businesses that the big box stores can be open, but they can’t be. Small businesses are essential to our community, and we need to find ways to get them open.”

A committee headed by Lt. Gov. Will Ainsworth has made recommendations on the openings of some businesses that have been closed. Gov. Kay Ivey will soon be meeting with State Health Officer Dr. Scott Harris to decide on whether some businesses can reopen.

Wood and Price tend to believe that Harris will have the final say on this.

“I don’t think she (Governor Ivey) will make a move if Dr. Harris does not recommend it,” Wood said.

Nichols said he was concerned about opening too fast.

“I’m all for getting the economy going again, but we need to see what happens,” he said.