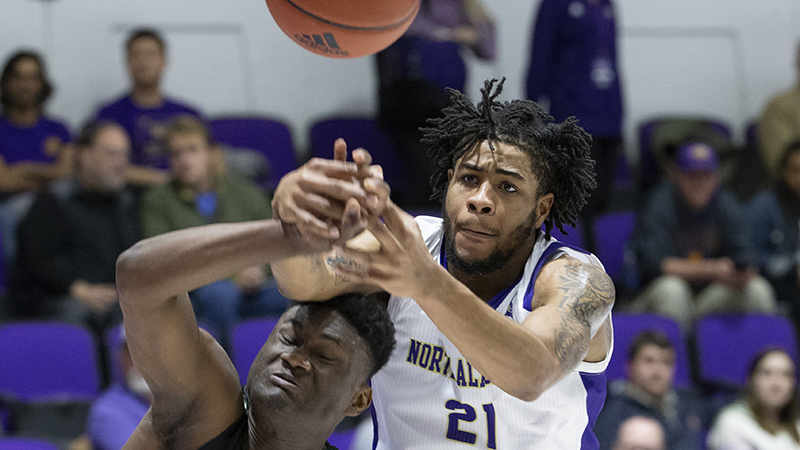 UNA's Manny Littles battles against Stetson's Mahamadou Diawara for a rebound in the first half of the game in Flowers Hall. [MATT MCKEAN/TIMESDAILY]

Coming out of high school, Emanuel Littles had basically done it all. He led Lanett to three consecutive state championships and was the 2A Tournament MVP as a senior. He averaged 17 points and 16 rebounds as a senior.

He signed with North Alabama and with his size, 6-foot-7, he was projected to be a small forward that would play some power forward.

“I was looking forward to playing that and working on that coming into college. When I got actually when I got UNA, our coach used to make me work out with the bigs, the fours and the guards,” Littles said. “I’m versatile, and I can play many different positions. I just want to do what it takes to make the team win.”

He started his first college game as the Lions power forward, but after seeing Littles’s hustle on the glass, head coach Tony Pujol moved the forward to center.

Most Division 1 centers are at least 6-foot-9 or taller. Littles is undersized for his position, but that didn’t faze him when he made the switch.

“Growing up the way I have, it means a lot. Basketball is a happy place for me, and I’ll do whatever to be out on the court,” Littles said. “I won’t let anybody take that away from me. It doesn’t matter if you’re 6-foot-10, 7-foot or 6-foot-8. It doesn’t matter. When it’s time to get on the court, I feel like we’re the same size. You’ve got to show up.”

Littles played in 30 of the Lions 32 games as a freshman, averaging 4.5 points and eight rebounds a game.

After starting two of the first four games, he was moved to the bench, so he could learn the finer points of playing the five. He reentered the starting lineup at the start of conference play and never looked back, starting 16 of the last 17 games of the season.

There were two big reasons Littles rejoined the starting lineup. The first was he started to develop and get more comfortable at center. The second was he stepped up as a leader.

“Coach saw how much work I’ve put in the gym,” Littles said. “ I know how to get along with others. I’m outgoing. I know how to speak to others, you know when it’s rough or when it’s good. A lot of people tend to follow me because of my personality. Coach saw all of that and took the time to trust in me and believe in me. He gave me a spot to be a leader on the team and I thank him for that.”

Littles continued to feel more comfortable and develop as a center as a sophomore. Both his rebounding and scoring numbers went up as that growth continued. He averaged eight points and 10.3 rebounds a game.

“Everybody wants to be a scorer or that main factor on offense, and I know basketball revolves around a lot of other things,” Littles said. “You have to separate yourself from others. Since everyone wants to be that scorer, I need to find another way that I can bring value to a team.

“It’s all about banging and I like competition. I love someone that’s going to compete with me and make me work harder.”

His 10.3 rebounds a game led the Atlantic Sun Conference and his 55 shooting percentage was fifth in the conference.

“I added some things to my game that I did as a senior in high school that I didn’t do as a freshman, plus all the things that coach did with me over the summer,” Littles said. “It all brings growth.”

Once the conference schedule started, Littles took his game to another level. He scored 136 of his 217 points and grabbed 187 of his 279 rebounds against Atlantic Sun teams. He also finished with five of his eight double-doubles.

“My teammates started believing in me more,” Littles said. “They made the game a lot easier by driving and kicking on dump downs.

His best game was against New Jersey Institute of Technology in late February. The two teams were tied at the half, but Littles led the Lions to a win, scoring 14 of his 18 points in the second half.

“Something just took me over,” Littles said. “They did a sub, and I looked at my teammate and I said ‘watch this. I’m fixing to go to work.’ After I told him that, I scored like eight or nine points in a row.”

He also grabbed 13 rebounds in the win.

Going into his junior season, he is working on ball handling, which will allow him to add another layer to his game. This isn’t new to him since he was training with the guards in high school, AAU and early on in his college career.

He’s also still developing the finer parts of his inside offense. At the end of the 2019-20 season, teams started to try and take away Littles’s right hand, forcing him to attack with his nondominant hand, so he’s been working on getting more comfortable shooting with his left hand by doing drills and playing pickup games.

“From an offensive end, it’s time to add more parts to the game or spread out the floor like I can,” Littles said. “