Givorns says grocery store rush as slowed down some 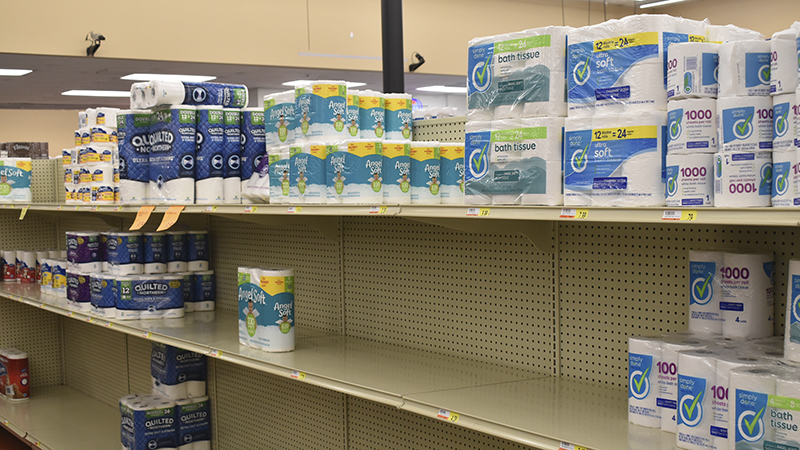 On Friday, March 13, the first case of COVID-19 was reported in the state of Alabama, forcing schools and some businesses to shut down. That weekend, grocery stores were packed as people flocked to get food and other provisions they would need during the shutdown.

This influx of people caused problems for most stores for the first week, and those problems have continued a full month later.

A lot of the products that were flying off the shelves the first month have continued to stay off the shelf. Those items are cleaning materials, which include hand sanitizer, disinfectants and Clorox wipes. Toilet paper and long-lasting food items, such as packaged meats, cans of soup, Ramen noodles, spaghetti and more, are also in short supply.

“The manufacturers have been so far behind because of the demand,” Crosby said.

Different brand names, like Belloni and Margaret Holmes, have been also tough to get in supply.

During the first weekend of the coronavirus in Alabama, dairy, milk and bread were all major items that were hard to find and keep in stock. Since then, suppliers have adjusted. They have been able to send the necessary amount of eggs and milk. The production of bread has changed, as the bread companies shifted their focus from a variety of different products to just white bread, hamburger and hot dog buns.

“That helped us catch up on the demand that we were seeing,” Crosby said.

The frozen food section has not been affected. Outside of frozen pizzas and hot pockets, Givorns has been able to stay well-stocked in those items.

Givorns and most other grocery stores have been hit by a couple of different waves of customers. The first was March 13 and the opening weekend. The second was when SNAP recipients received an extra supplement from the government, while the third was when Gov. Kay Ivey put a shelter in place order on April 4. Right now, stores are gearing up for the stimulus money that people will soon receive from the government.

Crosby gives credit to his staff for being able to handle the different waves.

“My staff has been great,” Crosby said. “We have people working a lot of overtime and extra hours.”