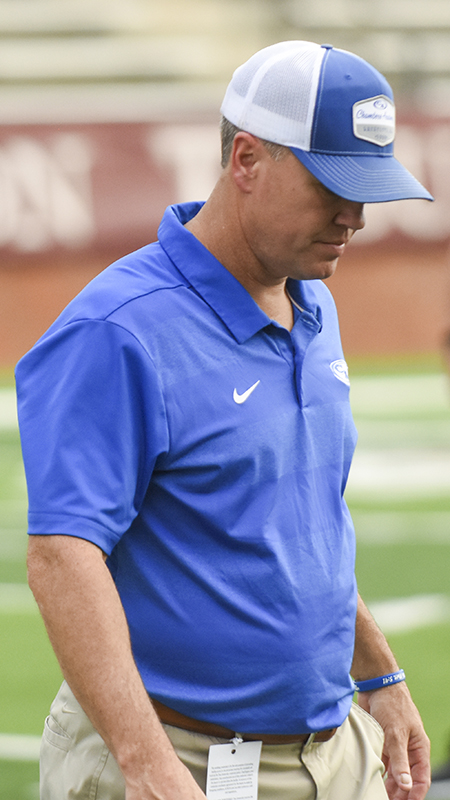 Chamebers Academy head coach Jason Allen has led the Rebels to the last five state championship games. The Rebels are 51-7 since 2015. --File photo

Chambers Academy will always be a special place for Jason Allen.

Allen grew up a Rebel. He was a lifer at the school and made a name for himself playing football, basketball and baseball, starting at quarterback, point guard and center field respectively. He graduated from Chambers in 1992 and went to Auburn.

In 1995, he walked onto the football team, playing mostly on the Tigers’ scout team.

“I just had a great experience there,” Allen said. “I wanted to be there longer, but I saw the writing on the wall as far as what I would be able to do there. The most that I would have been able to do was play on special teams at some point in time, but God showed that he wanted me in coaching and gave me the opportunity.”

Allen’s favorite teammate from his Auburn days was Takeo Spikes, who went on to have a 14 year NFL career.

“He was just an impact player from day one, but he was a really nice guy too,” Allen said. “He was humble and a hard worker.”

During the summer of 1995, Allen had a chance to start his coaching career.

The Rebels coach at the time Ken Fordham was working in the summer and saw Allen working out. He talked with Allen and in that conversation, Fordham asked Allen if he had ever thought about coaching. Allen hadn’t thought about it, but as the thought continued to sit in his mind, the idea started to sound better. He decided to try it and he fell in love with it.

“There’s a part of coaching that fills a competitive void,” Allen said. “It’s not the same as playing but it’s about the closest that I’ve ever been to getting that same excitement and rush.”

Allen began his head coaching career a couple of years later, taking over the Rebels in 1998. In his first four years as the Rebels’ head coach, Chambers went 31-17 with two trips to the championship game.

His first stint with the Rebels ended after the 2001 season. During the 2002-2005 seasons, Allen was an assistant coach for a couple of different schools. He returned to Chambers Academy for another four-year stint, before taking a job with Glenwood.

He was with the Gators for three years and made the playoffs all three years, but it didn’t give him that same satisfaction as being the head coach of the Rebels.

“Just that home feeling. I’ve worked at five or six different schools, but when you’re home you work harder than you ever would, going above and beyond than you ever would,” Allen said. “It’s just a different sense of pride that you get when you build a program and establishing it into something that people recognize and respect. When you wear those colors, it just means more.”

Allen returned to Chambers Academy for the start of the 2013 season. In the seven seasons back at his alma mater, Allen has turned the Rebels into a powerhouse. In the 87 games since he’s returned, the Rebels are 69-18, including a 51-7 record since the 2015 season.

“It starts with a system that you believe in, and we’ve introduced it into our school and into our kids all the way down to a young age, ” Allen said. “Those kids know what to expect.”

One of those kids that has been brought up in the Chambers system is Allen’s son Payton, who just like his father is the Rebels starting quarterback, point guard and center fielder. Allen has been his son’s head coach since he was a child and his school head coach since the seventh grade.

“It’s a dream come true. Everyone wants to coach their son,” Allen said. “It has been really fun, and I’ve tried to make it fun for him. I’m really big on these kids enjoying the high school experience because it only comes once in a lifetime. As of right now, there’s nothing that I can say that I would change a thing. We’ve shared a lot of good times together.”

One of those good times was the 2018 AISA Class A Championship game. Allen had been a coach for more than 20 years and had competed for several championships, but he had never broken through and won the game.

In 2018, he finally claimed the title. Payton scored the game-winning touchdown.

“When he scored that touchdown, you could feel the burden lift off the entire community and the entire town,” Allen said.

Allen already had experience coaching a family member before his son was old enough to varsity, as his younger brother Matthew played for Allen in his first stint with the Rebels.

“That was extremely difficult. That might have been the toughest thing I’ve ever done in my coaching career. That was much more challenging than coaching my son,” Allen said. “I wouldn’t change it for anything in the world.”