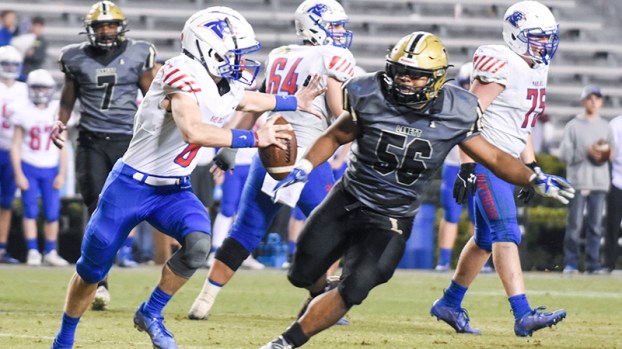 Lanett defensive lineman Eric McCants chases down the Mars Hill quarterback in the 1A State Championship game. He committed to play football for Garden City Community College on Thursday.--File photo

Everything fell into place for Lanett defensive lineman Eric McCants. He was a key piece of the defense that help claim the 1A State Championship, and he announced on Thursday that he would continue his career at Garden City, a community college in Kansas.

“First off, I would like to thank God, without him none of his would be possible. I would also like to thank my family, friends, coaches and teammates who have been there pushing me through this process,” McCants said in his announcement on Twitter. “I appreciate everything that you’ve done for me because of all the love and support, I am able to continue playing the game that I love. With that being said, I will be continuing my ACADEMIC AND ATHLETIC career at Garden City Community College.”

McCants was a vital player for the Panthers’ defense. In his final year, he finished with 93 tackles, 23 of which were for a loss, 11 sacks and eight forced fumbles. He was able to constantly slip through opposing lines and either make a play or blow up a play enough for someone else to make a stop.

With this rich history, McCants knows that GCCC will help him make it to a bigger school after his time is up with the Broncbusters.

“I felt it would be the best option for me to get an opportunity to go to a bigger school,” McCants said.

Like most successful community college football programs, Garden City is a program that has players playing for a year or two before going off to some bigger schools. For example, Terry Wilson, who was the Kentucky starting quarterback for the last two years, spent his freshman year of college at GCCC.

The lineman has been told by the coaching staff that if he works hard that he can earn a spot and become something special at the next level.

For McCants, the competition he will be facing is the best part.

“I’m going to go up against the best of the best every week,” McCants said. “I’ve never shied away from competition. It’s going to make me a better athlete and a better person. It’s going to be a humbling experience to compete against those types of guys and be around a winning program.”

McCants is now the fourth player off the 2019 Panthers football team to commit to play college. Kristian Story signed to play at Alabama. B.J. Smith and Dametrious Johnson both committed to play at Point University.

Lanett football has had an abundance of talent the last decade, as the Panthers have had at least one player... read more