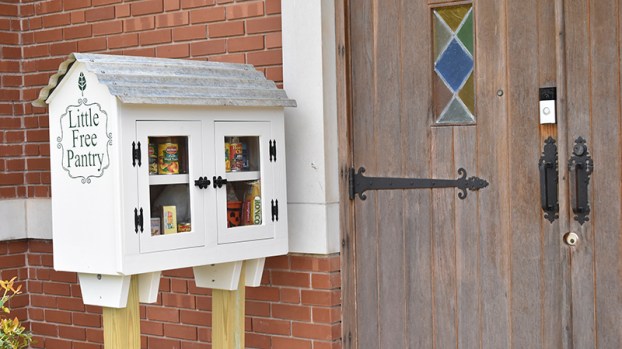 A Little Free Pantry hangs outside West Point Presbyterian Church and is stocked with different food items. Members of the community have been bringing items to the various pantries to help others get through the COVID-19 pandemic. --Cody Estremera

In February of 2019, Amanda James and her husband, Mike, put up the first Little Free Pantry in West Point as a way to help the community. Later that year, they started a GoFundMe page with the goal of $2,000 so they could build more around West Point. As of Wednesday, the page is a little more than halfway to its goal, totaling $1,014

The sixth location will be at Roper Heights Baptist Church, which was donated by the Lion’s Club.

The pantry is a way for those that might not have access to food every day, which is especially key because of the coronavirus spreading throughout the world.

“This is such a great way for community members to be able to give back and help their neighbors in times of need, while still practicing social distancing,” James said.

Because grocery stores are not fully stocked right now, the Free Little Pantries are being used more than ever before.

“With them being used so much right now it’s hard to keep them stocked. Members of the community have been bringing things by to ours on Avenue E, and I know people have asked about the other locations to see where they could donate things,” James said. “It is so wonderful to see the community helping to keep the pantries stocked and give back to their neighbors. There is such a great need right now with people being out of work and the kids being home from school.”

James has also hung little bags of fruit at her pantry, and they were taken quickly. She advises if you want to add fruit, don’t put them directly in the pantry because of the heat.  To donate, simply visit one of the pantries and put the food into one of the boxes.

VALLEY — A number of local industries, businesses and restaurants are joining forces to show appreciation to the hospital workers... read more