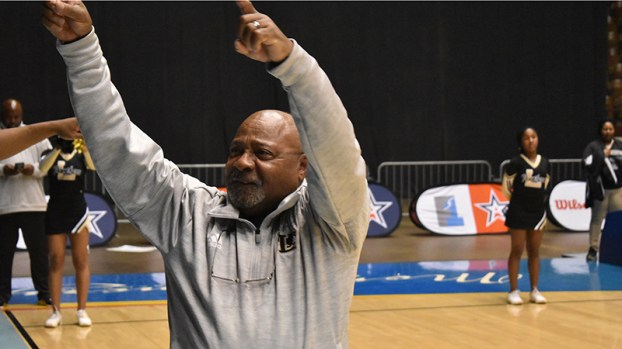 Carter points to the Lanett fans as he walks to mid-court after the Panthers won the 1A Southeast Regional Championship. --File photo

Richard Carter taking retirement one day at a time

While at the podium in Birmingham, Lanett head basketball coach Richard Carter said the first thing he was going to do was go fishing with his brother in Florida to start his retirement the way he wanted.

Unfortunately for the legendary coach, he hasn’t gotten the chance to make the drive because of the coronavirus pandemic across the country.

Instead, Carter has started his retirement relaxing at home, watching movies and doing some yard work. His wife, Brenda, still has to go into work, so Carter has mainly tried to stay out of her way. Now that he is retired, his primary job is to be the family cook.

This past Saturday, Carter spent an abundance of time cooking a feast for his family. He made collards, rutabaga, baby lima beans, fresh corn, cornbread, oxtails and baked ham.

“I had a cooking feast,” Carter said. “I got up so early on Saturday, that I had Sunday’s dinner before 1 o’clock.”

Alongside fishing with his brother, Carter’s other big plan during retirement was to replace his hip, which has been causing him discomfort for a while. He was planning to have the operation in March, but just like his fishing trip, the surgery has been put on hold until the pandemic calms down.

“I really wanted to go ahead and do it, but I watch the news a lot and one of the things they’ve been asking people to do is, unless it’s an essential operation, for us to of hold off,” Carter said. “I’ve been honoring those wishes because they said they need every available doctor to be working on the coronavirus. I’m just staying out of the way.”

Overall, Carter said he’s still moving around the house fine, just with some pain in the hip.

While the rest of his retirement plans have been put on the backburner, Carter has still been able to pastor his church.

Just like most churches around the country, Washington Chapel African Methodist Church has been leading worship on Facebook Live. It also uses its prayer line to help get Carter’s sermons to those wishing to hear it.

“It’s not something that I usually do, so it is different. But at the same time, I love it because it’s another media outlet giving people the opportunity to hear the word,” Carter said.

Washington will soon have the equipment installed so it can preach on Facebook Live easier. It will also become part of the normal Sunday routine once everything starts to return to normal from the epidemic.

“It’s really an agent of change. Maybe that’s one of the things that God is doing, giving us the opportunity to reach more people by using that social media network to deliver his word,” Carter said.

Everything fell into place for Lanett defensive lineman Eric McCants. He was a key piece of the defense that help... read more